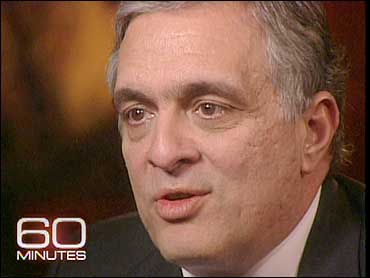 In October 2002, as Congress was about to vote to grant George W. Bush the authority to invade Iraq, Democratic Senator Carl Levin forced the CIA to declassify intelligence analyses indicating it was unlikely that Saddam Hussein would strike the United States with unconventional weapons or share such arms with anti-American terrorists. But CIA director George Tenet undermined the political punch of this disclosure by stating publicly that the CIA's view was not inconsistent with Bush's claim that Iraq posed an immediate and direct WMD threat. Moreover, Tenet's CIA at the same time revealed there had been "senior-level contacts" between Iraq and al Qaeda. This suggested that Saddam was in league with the 9/11 murderers. Unmentioned was that CIA analysts had concluded there was no evidence of significant ties between Baghdad and Osama bin Laden. With this misleading disclosure, Tenet helped Bush grease the way to war.

As Tenet recounts this episode in his new book, "At the Center of the Storm," he concedes he was wrong to have bent to a request from National Security Adviser Condoleezza Rice to issue this public comment. But he neglects to mention release of the intelligence that appeared to link Saddam to al Qaeda. Here's the Tenet formula in a nutshell: Accept some blame while blaming others and sidestepping inconvenient matters.

Tenet acknowledges that the CIA failed to act on pre-9/11 leads and botched the WMD issue. But he ducks a critical charge: He and his agency disregarded warning signs about the WMD intelligence that was being oversold by the White House. For instance, Tenet downplays questions raised within the agency about the credibility of Curveball — the fabricator who claimed Iraq had mobile bioweapons labs — and ignores previously disclosed e-mails that document this internal debate.

It's hard to tell the unvarnished truth about oneself (and one's agency); it's easier to do so about others. And Tenet does unload. He notes that the administration never seriously considered options other than full-scale war on Iraq and that it did not ponder the implications of "what would come next." Its prewar WMD rhetoric, he writes, "seemed considerably ahead of the intelligence we had been gathering," and the administration ignored prewar assessments of troubles that could arise following an invasion. Tenet also shows how calamitous post-invasion decisions were not rigorously discussed before being implemented.

This is a profound indictment, but Tenet never faults Bush. He aims mostly at Vice President Cheney and the neocons. Cheney, Tenet notes, made claims about Iraq's WMDs that were not even supported by the CIA's overstated intelligence. On one occasion, Tenet had to kill an over-the-top Cheney speech on the unproven al Qaeda-Iraq connection. Before and after the invasion, the neocons relentlessly promoted Ahmad Chalabi, a controversial Iraqi exile and schemer, as the solution to whatever the problem of the moment was. Condoleezza Rice was "remote," did little in response to pre-9/11 warnings and failed to broker Iraq policy in an effective manner. Defense Secretary Rumsfeld was out of touch with reality on Iraq. Tenet also slams David Kay, whom Tenet hired to lead the WMD search in post-invasion Iraq. Kay's crime? Not leaving his post quietly but instead telling the press and Congress that there were no WMDs to be found. In all this, Bush, inexplicably, is blameless.

Tenet's book is gripping (thanks to co-author Bill Harlow, a novelist and former CIA spokesman). But it's self-serving and partial. Tenet never holds himself fully accountable for his prime mistake: not paying sufficient attention to prewar questions about both the WMD intelligence and the post-invasion planning and not speaking out about his and the administration's multiple failures until now (when he is making millions of dollars with his mea-quasi-culpa). All his explaining and blaming cannot cover up an undeniable fact: Tenet was not merely at the center of a disastrous storm; he helped to create it.

By David Corn
Reprinted with permission from the The Nation