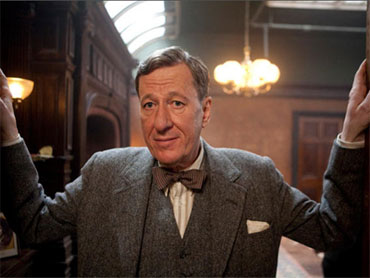 Rush was nominated for his role as Lionel Logue, a speech therapist to British King George VI, in "The King's Speech."

"The King's Speech leads the field for this year's awards, with 12 nominations.

Rush already has an Oscar for 1996's "Shine." The new nomination is his fourth.

Rush told Wragge he was always passionate about "The King's Speech," but thought there were many obstacles and challenges the movie would have to get through.

He said, "The questions I had about it were that, if you looked at it on paper and you looked at it as a script, you sort of thought, 'There's a lot of obstacles and challenges to overcome here' (with) actors and crew working on this sort of story about two middle-aged men who become friends. That's not an easy byline to put on a poster. But I liked it very much. So I got on to my agent and said, 'You know, if they can develop this as a screenplay, I think we might have something pretty amazing here."

Rush said a big challenge was to make a movie about two men talking into a great cinematic experience.

"We had about five big scenes that are 10 pages long, just two men talking to each other. That's not going to be the most interesting cinematic duo. But Tom Hooper is such a wonderful astute, collaborative, very questioning, director (that we) guided us through that, and I did sit opposite Colin (Firth, who played the king) for those scenes off-camera and was kind of in awe of where he was going. Because Tom threw the camera very close to Colin very early on in the shoot and said, 'I want to you feel the pressure.' And I was astonished by his playfulness and his skill and slight audacity in playing this repressed English figure, but giving it this great sort of dynamic. It was a wonderful, wonderful thing to watch."