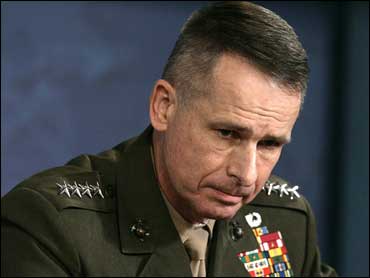 The Pentagon's top general expressed regret Tuesday that he called homosexuality immoral, a remark that drew a harsh condemnation from members of Congress and gay advocacy groups.

In a newspaper interview Monday, Marine Gen. Peter Pace, chairman of the Joint Chiefs of Staff, likened homosexual acts to adultery and said the military should not condone it by allowing gays to serve openly in the armed forces.

In a statement Tuesday, he said he should have focused more in the interview on the Defense Department policy about gays — and "less on my personal moral views."

That didn't sit well with gay veterans like Eric Alva, who was visited by his Commander in Chief after losing a leg in Iraq, CBS News national security correspondent David Martin reports.

"I think it was an insensitive and disrespectful remark to the thousands of men and women who are currently serving in the armed forces actually following the guidelines of 'don't ask, don't tell,' where they don't express their open orientation because they're not allowed to," Alva said.

No one knows how many gays are quietly serving in uniform, although one unofficial estimate puts it at 65,000, Martin reports. Whatever the number, Brian Fricke was one of them. He's a Marine who served nine months in al Anbar.

"He's saying you can still serve and die for your country, but don't tell if you're gay, because then you're dishonorable; you're immoral," Fricke said.

Pace did not offer an apology, something that had been demanded by gay rights groups.

"It's bad enough that he thinks that. It's even worse that he would be foolish enough to say that publicly," Arlene Isaacsen of the Massachusetts Gay and Lesbian Political Caucus told CBS Radio station WBZ-AM. "It is crass prejudice, crass bigotry and brazen ignorance, and it's disgraceful to think that someone in his position would think in these terms."

"General Pace's comments are outrageous, insensitive and disrespectful to the 65,000 lesbian and gay troops now serving in our armed forces," the advocacy group Servicemembers Legal Defense Network said in a statement on its Web site.

The group, which has represented some of the thousands dismissed from the military for their sexual orientation, demanded an apology.

In an interview Monday with the Chicago Tribune, Pace said he supports the policy, which became law in 1994 and prohibits commanders from asking about a person's sexual orientation.

"I believe homosexual acts between two individuals are immoral and that we should not condone immoral acts," Pace said in the audio recording of the interview posted on the Tribune's Web site. "I do not believe that the armed forces of the United States are well served by saying through our policies that it's OK to be immoral in any way."

Pace's senior staff members said earlier that the general was expressing his personal opinion and did not intend to apologize. They spoke on condition of anonymity because they were not allowed to speak on the record.

CBS' Susan Roberts reports that the White House agrees that Pace's comments were personal — and that it probably would have been best if he kept them to himself.

"General Pace's statements aren't in line with either the majority of the public or the military," said the Massachusetts Democrat. "He needs to recognize that support for overturning (the policy) is strong and growing" and that the military is "turning away good troops to enforce a costly policy of discrimination."

Pace, a native of Brooklyn, N.Y., and a 1967 graduate of the U.S. Naval Academy, said he based his views on his upbringing.

"As an individual, I would not want (acceptance of gay behavior) to be our policy, just like I would not want it to be our policy that if we were to find out that so-and-so was sleeping with somebody else's wife, that we would just look the other way, which we do not. We prosecute that kind of immoral behavior," he said, according to the audio and a transcript released by his staff.

The newspaper said Pace did not address concerns raised by a 2005 government audit that showed some 10,000 troops, including more than 50 specialists in Arabic, have been discharged because of the policy.

Louis Vizcaino, spokesman for the gay rights group Human Rights Campaign, said Pace's comments were "insulting and offensive to the men and women ... who are serving in the military honorably."

"Right now there are men and women that are in the battle lines, that are in the trenches, they're serving their country," Vizcaino said. "Their sexual orientation has nothing to do with their capability to serve in the U.S. military."

"Don't ask, don't tell" was passed by Congress in 1993 after a firestorm of debate in which advocates argued that allowing homosexuals to serve openly would hurt troop morale and recruitment and undermine the cohesion of combat units.

John Shalikashvili, the retired Army general who was Joint Chiefs chairman when the policy was adopted, said in January that he has changed his mind on the issue since meeting with gay servicemen.

"These conversations showed me just how much the military has changed, and that gays and lesbians can be accepted by their peers," Shalikashvili wrote in a newspaper opinion piece.

"For the Chairman of the Joint Chiefs to make this kind of statement is somewhat alarming," says CBS News military affairs analyst Mike Lyons, a retired major in the U.S. Army. "If he felt this way when he took the job, perhaps he should have had second thoughts, because it's this kind of feeling that he knew would get him into trouble politically."