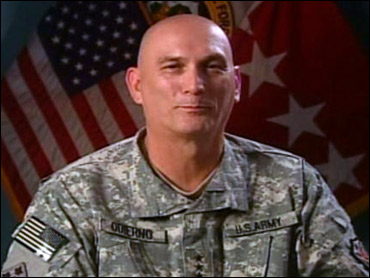 After six years and a staggering cost in money and lives, the war in Iraq appears to be finally winding down.

President Obama has ordered the 138,000 U.S. troops in Iraq withdrawn in three phases. They'll leave major cities - including Baghdad, Mosul and Baquoba - by the end of June. Combat operations will end by August of 2010 - leaving a force of up to 50,000 Americans, primarily to train Iraq's military. And, all U.S. troops will be out by the end of 2011.

But in recent weeks, there's been a series of clashes between Sunni militias and Shiite-led government forces, raising concern that American troops will have to stay in the big cities beyond this June. In an exclusive interview with CBS Evening News anchor Katie Couric, General Ray Odierno - the commander of U.S. forces in Iraq - said he's confident it won't come to that.

Odierno: I believe we'll make that timeline in every city probably except for, probably, Mosul. There'll be a decision that will be made. We'll provide a joint assessment between Iraqis and the U.S. We'll provide that assessment to the Prime Minister Maliki who will make a final decision.

Couric: Can you describe circumstances in which the current timetable would be rendered null and void?

Odierno: Well, first off, we have an agreement between us and the government of Iraq. And that means that all U.S. forces will leave Iraq by the end of 2011. We can never predict what might happen in the future. But I would tell you the chances of that happening are much less today than they were a year ago.

Couric: Thousands of Iraqis protested in the streets of Baghdad last week, wanting U.S. troops out of Iraq. What do you think the feeling is by most Iraqi citizens toward U.S. forces there?

Odierno: Well, it's hard to gauge. I would say, though, they were calling for a million man march in Sadr City called by Muqtada Al Sadr. And they had a turnout of about 7,000. Extremely low turnout. So I think many people voted by not turning out for that demonstration. I would just say that of course Iraqis want the U.S. to leave. They want to be a sovereign country. But they don't want us to leave until they are positive that they can take over and maintain the security and stability.

Couric: When I visited Iraq a couple of years ago and you showed me the new strategy that was being practiced by U.S. troops, the Iraqi security forces were not really up to snuff at that point in time. On a scale of one to ten, where are those forces right now in your view?

Odierno: Yeah, I would say overall - I hate to put a number on it - but I'd say they're probably somewhere around a six or a seven on a scale of ten. They've made, again, significant progress. We still have some work to do in helping them with logistics, with aviation, with still doing some planning and still a little bit in working some large scale operations. But for the most part, they are able to do that on their own today.

Couric: Do you think there needs to be more of a national reconciliation among the ethnic groups - Shiites, Sunnis and Kurds - in order to move the political ball forward as well?

Couric: On a lighter note, I hear you have ventured into the world of Facebook. Why?

Odierno: It's a new phenomenon. All the young kids in America participate in Facebook and I wanted to give it a shot. So it's been interesting. We've only been doing it for a short time. I'm very pleased to announce I have about 4,200 friends. What I try to do is use that to send some different kinds of information about Iraq. And I thought it'd be interesting for everybody.

Couric: You've said that one of your toughest days was getting the call that your son was seriously injured in Iraq. His injury resulted in the loss of his arm. How is he doing and can you tell us a little about him?

Odierno: Well, first off, he's doing wonderful. He got married in January. He is getting ready to graduate with his MBA from NYU in May. And he has been hired by the New York Yankees. So he's doing tremendously. He continues to do a lot of volunteer work with the wounded warrior projects and many other wounded warrior issues. And I think that also drives him as well. But he is doing tremendously well. He motivates me every day. And he motivates many others that are around him.