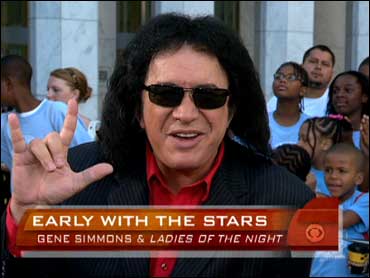 As a member of the band Kiss for 35 years, Gene Simmons has spent a lot of time rock and rolling all night - and partying every day. Now he's out with a book about workers who like to party on a different sort of night shift.

"Let's call it what it is. The poetic phrase is 'the oldest profession in the world,'" he told Early Show co-anchor Harry Smith. "So it takes a historical point of view from the brothels of Rome to the geishas of Japan."

The book's lengthy title is "Ladies of the Night: A Historical and Personal Perspective on the Oldest Profession in the World," but Simmons said the "personal perspective" doesn't mean he's been a customer.

"My problem with that is they expect me to pay them. They're supposed to pay me," he said with usual bravado. "Not going to happen. Seriously, it's a book that I wanted the style to match the content. It's gold trimmed. It's a beautiful piece. Put it on your coffee table and let the guests in your house find the delicious subject by which to spend an evening talking about."

Simmons said that he's not attempting to romanticize prostitution, but instead wants to open up dialogue about the subject.

"This is something everybody knows exist. But in this puritanical culture, we have terrific family values and that's great," he said. "Other subject matters are swept under the rug."

He said that he wouldn't object to it being legalized because he feels government regulation could be beneficial.

"I'm not in an advocacy group," he said. "I would not object to it being legalized, because anything the government is not involved in - in terms of trade - is the wild west so you've got drugs, you've got criminals."

In addition to promoting his book, Simmons has been busy with music and television.

He and his Kiss bandmates kicked off their 35th Anniversary Tour in Australia in March.

"And they said it wouldn't last. I got your 'wouldn't last right here,'" Simmons quipped, Brooklyn style. "Melbourne, in front of 80,000 people. Whirlwind tour of Europe."

The band is on a break from the tour while Simmons films season 4 of his reality series "Gene Simmons Family Jewels." New episodes of season 3 are currently airing on A&E.