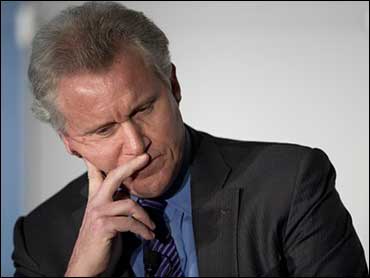 General Electric Co. said Wednesday that Chairman and Chief Executive Jeffrey Immelt will forgo a 2008 bonus and performance awards worth millions of dollars after the company's earnings fell last year and its stock price plunged amid a deteriorating economy.

The Fairfield, Connecticut-based conglomerate, which makes everything from locomotives to household appliances, said in a filing with the Securities and Exchange Commission that Immelt will not receive his $11.7 million long-term performance award. Immelt received a base salary of $3.3 million, unchanged from 2007, but no bonus. In 2007, GE paid Immelt a $5.8 million bonus.

The actions amount to a 64 percent reduction in Immelt's cash compensation compared with a year earlier.

Immelt said in a statement that GE's board of directors took the steps at his urging because of the company's sagging performance. Earnings were down 22 percent in 2008 as the growing recession battered the company's industrial division and its lending arm, GE Capital, struggled with mounting loan losses. Company shares lost more than half of their value last year and are already down 33 percent in 2009, trading at levels not seen since the mid-1990s.

"Earnings came in well below where we expected. The broad equity markets, and GE's stock price, declined significantly in 2008. In these circumstances, I recommended to GE's Board of Directors that I would not receive a bonus for 2008," Immelt said.

Chief Financial Officer Keith Sherin and Michael Neal, chief executive of GE Capital, received 2008 bonuses 15 percent and 25 percent below their prior-year payments, respectively. The two executives both declined half the amount earned under their long-term performance awards, which means a $2.6 million reduction in Sherin's payment and a $2.9 million reduction in Neal's payment.

On average, GE reduced the size of its executive bonuses by 19 percent during 2008.

The AP's calculations of total pay includes salary, bonus, incentives, perks, above-market returns on deferred compensation and the estimated value of stock options and awards granted during the year. The calculations exclude changes in the present value of pension benefits, and they sometimes differ from totals companies list in the summary compensation table of proxy statements filed with the SEC.

GE said in December that it will shrink the size of GE Capital, which provides loans ranging from home mortgages overseas to financing for large energy projects. The company plans to reduce GE Capital's reliance on risky debt and cut its work force during the restructuring. GE has injected its own money into GE Capital, taken part in federal programs designed to ease credit markets, and raised $15 billion from Warren Buffett's Berkshire Hathaway and other investors through stock sales.

Many investors believe GE will be forced to cut its dividend, now forecast at $1.24 for the year, if it can't generate enough cash flow for the quarterly payouts. GE has already paid half of the dividend, but the company said recently that it will evaluate its dividend payments for the rest of the year.

The company also risks losing its rare "AAA" credit rating this year because of GE Capital's woes. Ratings agencies Moody's Investors Service and Standard & Poor's are both reviewing their top ratings for GE this year.

GE said in its proxy filing that while Immelt did not reach the financial goals the company set for him in 2008, the company's board believes he "performed well in an extraordinarily tough business environment."

"Mr. Immelt adapted the company to rapidly changing and deteriorating economic conditions that emerged after the goals were set," the proxy states.