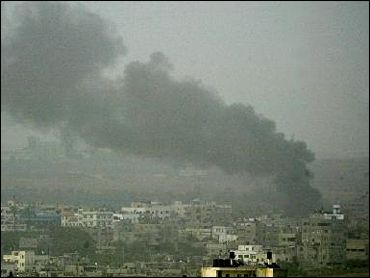 Palestinian militants blew up an Israeli armored personnel carrier Tuesday, killing six Israeli soldiers in one of the fiercest battles in Gaza City in recent months. Five Palestinians were killed and 88 wounded in the fighting.

A few hours later, car in Gaza City was hit by an Israeli air strike, killing a Hamas member and wounding at least six others.

For more than 12 hours, explosions and machine gun fire from tanks and helicopters were heard across Gaza City, and gray smoke rose into the air. The army had entered the crowded Zeitoun neighborhood in search of weapons workshops.

The death of six soldiers — the highest casualty count in a single army operation in nearly two years — was expected to increase public pressure on Prime Minister Ariel Sharon to withdraw Israeli troops and settlers from the Gaza Strip. Sharon is pushing for a withdrawal, but the plan was vetoed by his Likud Party in a referendum last week.

"We are fighting a ruthless enemy, without human feelings," Sharon said. "We will not stop fighting him and hitting him, wherever he acts and hides."

Despite losing some fighters, Hamas described the battle as a victory, reports CBS News Correspondent Robert Berger. It was the deadliest blow to Israeli forces in the Palestinian territories since November 2002.

The armored personnel carrier blew up around 6:30 a.m. local time, as it was on its way out of Gaza City. The vehicle was packed with about 220 pounds of explosives that were to have been used in blowing up weapons workshops. Combined with a roadside bomb detonated by militants, the explosives produced a powerful blast.

An Israeli military official, speaking on condition of anonymity, said the blast scattered body parts across a radius of about 300 yards in a densely populated area, and that troops were having difficulty retrieving the remains under heavy fire.

Officers said Israel would search door-to-door to recover the remains, in accordance with the Jewish custom of burying the dead as soon as possible after death. Militants were warned through backchannels that Israel would retaliate harshly if the body parts weren't returned, security officials said.

Hamas gunmen displayed pieces of metal and bits of flesh they said they collected at the scene of the blast. Two masked men on a motorcycle held up a bloodied burlap sack with remains.

Foreign Minister Silvan Shalom told Secretary of State Colin Powell that Israel "is dealing with animals" and would do everything it must to bring the fallen soldiers to burial in Israel, reports the Jerusalem Post.

Palestinian gunmen planted mines and fired automatic rifles and homemade anti-tank shells during the intense fighting. In one incident, gunmen surrounded by children and teens set up a grenade launcher in an unpaved alley, waiting for a target.

Hamas claimed responsibility for detonating the bomb under the armored personnel carrier.

"Israel's incursion into Gaza this morning proves that Sharon has fallen into a trap and he doesn't know how to get out of it," said Hamas spokesman Sami Abu Zuhri, referring to Sharon's failure to win approval for a Gaza withdrawal from his Likud Party.

Hundreds of gunmen participated in the fighting. The army blocked the main north-south road in Gaza, apparently to prevent more armed men from reaching the scene.

Residents said one metal workshop and toy factory was damaged.

In all, five Palestinians were killed in the fighting, including at least three gunmen and an 18-year-old whose head was blown off. Eighty-eight Palestinians were wounded, including 14 who were in critical condition. Among the critically wounded was an 11-year-old boy on life support. Seven of the wounded had lost limbs.

The Zeitoun neighborhood, near the Jewish settlement of Netzarim, is known as a stronghold of Islamic militant groups.

Palestinian Prime Minister Ahmed Qureia accused the Israeli military of trying to sabotage all peace hopes. "Each time there is hope for peace and for the resumption of the peace talks, Israel insists on going into places and escalating the situation," he said.

Israeli forces frequently enter cities and towns in the Gaza Strip, trying to arrest or kill members of militant groups and destroy workshops where weapons, including crude mortars and rockets, are made. Israel says it has to act since Palestinian security forces are doing little to rein in militants.

Tuesday's military operation came a week after Palestinian gunmen killed a pregnant Jewish settler and her four daughters in a shooting attack in Gaza.