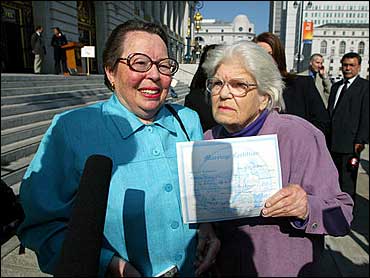 In an open challenge to California law, San Francisco city authorities performed at least 15 same-sex weddings Thursday and issued about a dozen more marriage licenses to gay and lesbian couples.

By midafternoon, jubilant gay couples were lining up under City Hall's ornate gold dome and exchanging vows in two-minute ceremonies that followed one after another.

"Today a barrier to true justice has been removed," said Gavin Newsom, newly elected mayor of the city considered the capital of gay America.

No state legally sanctions gay marriage, and it remains unclear what practical value the marriage licenses will have. The weddings violate a ballot measure California voters approved in 2000 that defines marriage as a union between a man and a woman.

The move by San Francisco's mayor came as lawmakers in Massachusetts continued to debate a constitutional amendment to ban gay marriage in that state, where the nation's first legally recognized same-sex weddings are set to take place this spring under a ruling from the Massachusetts high court.

The assembly-line nuptials began with longtime lesbian activists Phyllis Lyon, 79, and Del Martin, 83, who were hurriedly issued a married license and were wedded just before noon by City Assessor Mabel Teng in a closed-door civil ceremony at City Hall. The two have been a couple for 51 years.

Lyon and Martin said after their brief ceremony that they were going home to rest and did not plan anything to celebrate. The couple seemed proud of what they had done.

"Why shouldn't we" be able to marry? Lyon asked.

In Massachusetts lawmakers defeated a ban on gay marriage Thursday, but quickly took up another compromise proposal that would establish civil unions while stripping couples of the right to full-fledged marriage.

It was the third proposal rejected by lawmakers since the start of the historic session Wednesday. The first two amendments would have allowed for civil unions, while the third was solely an outright ban on gay marriage.

The latest compromise is more blunt than the earlier proposals about establishing civil unions in Massachusetts, and legislative leaders were hopeful that this particular mix of words would muster a majority and bring the Statehouse spectacle to an end.

Although the amendment under consideration would make Massachusetts only the second state in the country to approve civil unions, gay-rights advocates fiercely condemned it, arguing it would revert gay people to second-class citizenship after a hard-won court victory. Vermont is the other state with civil unions.

Any amendment approved by the Legislature would have to survive a series of legislative votes — now and in future years — before going on the ballot in November 2006. Voters would then have the final say over the issue.

The Supreme Judicial Court ruled in November that it is unconstitutional to bar gay couples from marriage — a decision definitively reaffirmed by the court last week. Under the decision, the nation's first legally sanctioned gay marriages are scheduled to begin in mid-May.

While lawmakers engaged in a fiery debate about which rights should be conveyed to gay couples, nearly 100 gay-rights advocates of all ages rallied and chanted outside the House chamber. A day that had begun on a quieter note — absent the thousands of spectators who came Wednesday — ended with the verses of "We Shall Overcome" echoing through the Statehouse.

Lawmakers engaged in lofty rhetoric about the need to preserve the institution of marriage and importance of basic equality. The debate took a decidedly personal tone, as several lawmakers shared from their own experiences.

Sen. Jarrett Barrios, the first openly gay lawmaker to speak during the two days of debate and one of the most visible critics of the ban, choked back tears when he spoke about how an amendment would affect his family. He and his partner of 10 years have two adopted sons, ages 12 and 7.

"Don't believe those who tell you that just defining marriage between a man and a woman will not hurt your gay and lesbian friends, your family members, your neighbors and your colleagues, because it will," the Democrat said.

Democratic Rep. David Flynn told lawmakers that a member of his family was now shunning him because of a vote he made Wednesday in favor of a ban on gay marriages.

"I lost a member of my family last night because of my vote," said Flynn. "And I say to that member of the family, 'I love you, I want you back in the family, but you must understand that I took the oath of this office ... and I've always sworn to the rest of you to what you and I think is right."'