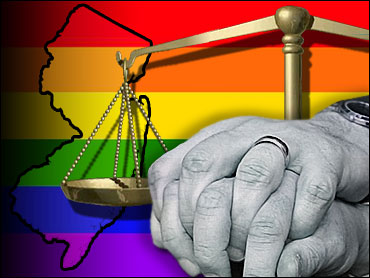 Gays are vowing to fight back through the courts after the state Senate voted down a bill to legalize same-sex marriage.

Minutes after the bill was defeated 20-14 on Thursday, gay rights advocates announced they would file a lawsuit seeking to get the state's top court to order New Jersey to recognize same-sex matrimony.

The state Supreme Court ruled in 2006 that the state must provide all the benefits of marriage to committed gay couples. In response, the Legislature legalized civil unions for gay couples.

The Senate vote also was the latest setback for gay rights supporters nationally. In November, Maine voters overturned a law that would have allowed gay marriage in that state. The law never went into effect. And last month, the state Senate in New York defeated a similar law. In California, a federal trial will begin next week on that state's gay marriage ban.

Gay rights advocates had pushed hard to get the New Jersey measure passed before Jan. 19, when Republican Chris Christie becomes governor. Democratic Gov. Jon Corzine had promised to sign the bill if approved by the Legislature, but Christie said he would veto it.

On Tuesday, Sen. President Richard Codey agreed to put the bill to a vote, leaving little mystery about its fate. Only one Republican, Sen. Bill Baroni, of Hamilton, was among the 14 senators who voted for the bill. The measure needed 21 votes to pass.

"We should not be telling one couple you can be married and another couple you can be civil unionized," Baroni said. "We are better than that. History is watching us now. She is asking us whether we'll side with equality and right - or for discrimination."

Those on the other side said changing the centuries-old definition of marriage was too drastic a move for lawmakers to make. Opponents want to put the measure to a popular vote.

"Suddenly, today, there's implications that you're discriminating against folks when you want to maintain that definition," said Sen. Michael Doherty, a Republican from Washington Township in Warren County.

As vigorous as the debate became, most senators who were thought to be on the fence in the preceding weeks did not chime in. Five senators did not cast votes.

Among the abstainers was Stephen Sweeney, a Democrat from Gloucester County's Washington Township who is expected to become Senate president when the Legislature reorganizes Tuesday. Sweeney did not return calls for comment.

Gay couples say civil unions don't work largely because employees at hospitals, insurance companies and elsewhere don't understand the concept. Gay rights groups said Thursday they would use statements made by senators to support their arguments in their lawsuit.