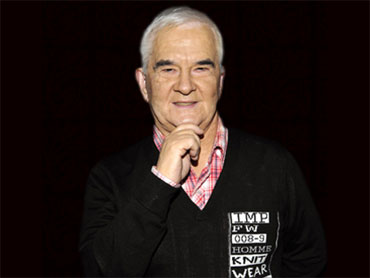 His companion, a male model who had recently been a contestant on a Portuguese reality TV show, was in police custody Saturday.

Workers at the InterContinental New York Times Square hotel discovered the mutilated body of the 65-year-old journalist, Carlos Castro, in his blood-drenched room at about 7 p.m. Friday.

CBS Station WCBS reports that Renato Seabra, a male model in his 20s who checked into the hotel with Castro late last month, is in police custody at Bellevue Hospital.

Authorities said police responded to a 911 call of an unconscious male at the InterContinental New York hotel. When police arrived at the scene, they found Castro around 7 p.m. in Room 3416, unresponsive with trauma to the head0.

The New York Daily News reports Castro had been bludgeoned and his scrotum cut off.

Castro had arrived in the U.S. in late December in the company of Seabra to see some Broadway shows and spend New Year's Eve in Times Square, according to a family friend.

There had been some friction between the two men toward the end of the trip, but nothing to suggest that anything horrible was about to happen, said the friend, Luis Pires, the editor of the Portuguese language newspaper Luso-Americano.

"I think that they were a little bit upset with each other, for jealousy reasons," Pires told The Associated Press.

The couple saw the musical "Spider-Man: Turn Off the Dark," took in the movie "Black Swan," and were supposed to meet Pires's daughter for dinner Friday when Seabra suddenly emerged in the lobby acting strangely, he said.

"He told my daughter, 'Carlos will never leave the hotel again,"' said Pires. He said his daughter, distraught, fetched a hotel manager. Security guards opened the door to the room and found the body.

Seabra left the scene, but was detained by police hours later at a hospital, where he was still being evaluated Saturday. No charges had been filed against Seabra as of Saturday morning, the New York Police Department said.

Police said the victim suffered serious head trauma. The medical examiner's office will determine the cause of death.

Seabra was a contestant last year on a Portuguese TV show called "A Procura Do Sonho," or "Pursuit of a Dream," which hunts for modeling talent.

He didn't win the show but did get a modeling contract with designer Fatima Lopes, who developed the show and was a judge on it.

Seabra had always been interested in fashion, he told the Independente de Cantanhede newspaper in September

"I have entered this world, and I don't want to leave it because I see I can be successful," he said.

Castro, whose his website also details his work as a producer for TV and radio, was admired in Portugal for his bravery in coming out as a gay man and "revealing the feminine side of his personality," said Rui Pedro Tendinha, a film critic who knew Castro.

He was a high-profile public figure as a TV personality, Tendinha said.

"The way he died is causing a big commotion in Portugal," he said.

"Any death is tragic but this one is especially sad," said Carlos Picarra, the founder of Portugal's Lux and VIP celebrity magazines. "This is hard to understand."

He called Castro a "very open, ambitious guy" whom he respected.

Designer Ana Salazar, considered a fashion pioneer in Portugal, recalled Castro's role as one of the country's first social columnists.

She said she was shocked by his death.

"It's like something out of a horror movie," she added.

A guest at the InterContinental, Suzanne Divilly, 40, told the Daily News she heard the two men arguing in their room during the day Friday.

"There was a lot of noise, talking," she said. "You could hear them arguing in the corridor and even in our room."

Another guest, Anthony Hughes, 43, of New Castle, Australia, told the newspaper he saw the woman who had gone to the hotel check on De Castro "screaming hysterically" in the lobby.

Pires described Castro as having "kind of a Liberace style. Eccentric, but very well-known." He said he had been on Portuguese TV since he was a teenager, had written several books and was friends with the former president of Portugal, Mario Soares.

The young model and older journalist had been dating each other for a few months, he said.

"My wife and my daughter were with him for the past three or four days," he said. "My wife told me that he was a very nice kid. Very polite. I think this must have been a crime of the heart."

"This was a 21-year-old kid, looking for fame. He (Carlos) probably saw him watching girls, or something."

The death is the second recent slaying in an upscale New York hotel room.

Swimsuit designer Sylvie Cachay, 33, was found strangled and drowned in a bathtub at the trendy Soho House hotel on Dec. 9. Her boyfriend Nicholas Brooks has pleaded not guilty in her death.

Brooks, the 24-year-old son of "You Light Up My Life" writer and Oscar winner Joseph Brooks, has been held without bail since his arrest.