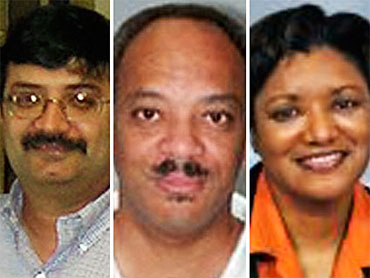 In the first all-Argentine major final, Gaudio won 0-6, 3-6, 6-4, 6-1, 8-6 and became the first men's Grand Slam champion from his country in 25 years. He's only the third unseeded French Open champion in the Open era.

Coria won the first eight games but required treatment from a trainer for apparent left leg cramps at 1-all in the fourth set. He offered only token resistance the rest of the set, hitting meek, flat-footed serves and declining to run after shots.

But following another visit from the trainer before the fifth set, Coria started moving better, even chasing down drop shots.

"I guess he was cramping," Gaudio said. "I was a little bit nervous because of that. It's pretty strange to play a guy who is cramping. You don't know how to play, the strategy against a guy like that."

The No. 3-seeded Coria still served weakly but broke four times in the final set, including for a 6-5 lead. He twice reached championship point in the next game but hit groundstrokes barely wide on both points.

Gaudio broke serve on another error by Coria, then grinned as the crowd cheered the latest twist in the strange match.

"When I was match point down, I was thinking it was over," Gaudio said.

After easily holding serve for a change, he needed only five points to break in the final game. Holding his first championship point after 3½ hours of play, he whipped a backhand crosscourt winner, then happily flung his racket.

The two Argentines embraced at the net before Gaudio took a jubilant lap around center court, slapping palms with spectators.

He became the first French Open champion to save a match point in the men's final since 1934, when Gottfried von Cramm beat John Crawford.

"I hope to be back next year and take my revenge," Coria said through a translator.

Playing in his first major final, Coria lost for only the second time in his past 39 clay-court matches. He won 18 of 19 sets in the tournament before losing the last two.

"He was playing unbelievable here during these two weeks," Gaudio said. "For sure he's going to get it next year."

Nervous at the start, Gaudio settled down to win the third set. Then came the bizarre fourth set, and he struggled to regain his rhythm after Coria resumed running.

The 25-year-old Gaudio is ranked 44th, fourth lowest for a Grand Slam men's champion in the Open era. The only other unseeded Roland Garros men's champs in the Open era were Mats Wilander in 1982 and Gustavo Kuerten in 1997.

The tournament title was just Gaudio's third, and his first since 2002. He's the first man from Argentina to claim a major title since Guillermo Vilas won the last of his four Grand Slam championships at the 1979 Australian Open.

Vilas watched the final from the VIP section behind the baseline. He participated in the trophy ceremony and gave Gaudio a hug.

"Unbelievable," Vilas said. "I've never seen anything like that in a tennis match. I didn't move from my seat once."

For the first hour the match looked to be the latest lopsided result in the last few days of the tournament. Anastasia Myskina needed just 59 minutes to beat Elena Dementieva in the all-Russian women's final Saturday, 6-1, 6-2.

On a sunny, 78-degree afternoon, Coria was as brilliant as the weather at the start. He left skid marks all over the clay and performed the sort of tricks with his racket that have earned him the nickname "El Mago" — the Magician.

Singing, chanting Argentine fans began arriving at Roland Garros 2½ hours before the start. By the ninth game the rest of the crowd was with them, roaring whenever Gaudio managed to win a point, rooting for a competitive match.

He needed 36 minutes to win a game, then 17 minutes to win another. By then he trailed 5-2 in the second set, and after losing the set, Gaudio stomped off the court and threw his racket against his chair.

With Coria two games from victory at 4-3 in the third set, a wave by the crowd delayed play for more than a minute. Gaudio, waiting to serve, put down his racket and ball, grinned and applauded the scene.

"I was too nervous," Gaudio said. "After the wave, the people started to help me, and I relaxed a little bit."

He swept the final eight points of the set, and the drama unfolded from there.