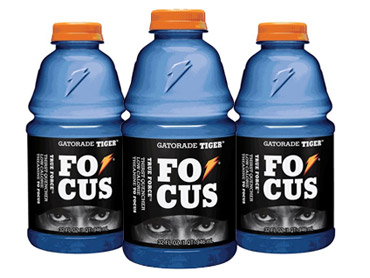 Tiger Woods' auto accident at his Florida mansion in the wee hours of the morning after Thanksgiving touched off touched off a media frenzy around the superstar golfer's carefully guarded private life, with numerous women coming forward claiming to have had a sexual relationship with him.

Before that, the married father of two young children had a pristine image and raked in hundreds of millions of dollars in endorsements.

And, while most of Woods' sponsors continue to stand by him, a major one is pulling the plug on a Woods-related product. PepsiCo's Gatorade won't be making any more Tiger-themed drinks.

The decision was made public before his recent troubles but, observes CBS News Correspondent Kelly Cobiella, the timing couldn't be worse for Woods.

"The more women that come out and the more mistresses we learn about," says so-called reputation doctor Mike Paul of MGP & Associates Public Relations, "the sponsors certainly have more of an evaluation going on, and there's increased pressure for them to at least consider dropping him."

And now, In Touch Weekly says it has obtained e-mails between Tiger and Rachel Uchitel, the first woman linked to Woods. On Nov. 9, Woods reportedly wrote Uchitel that theirs was much more than a fling. One missive cited says, "I finally found someone I connect with, someone I have never found like this. Not even at home. Why didn't we find each other years ago?"

This, as Woods' mother-in-law recovers after being rushed by ambulance from his Orlando home to a nearby hospital early Tuesday. Barbro Holmberg was treated for what are said to have been stomach pains and, say officials at Health Central Hospital, released 11 hours later. Barbro, 57, is a Swedish politician.

In the 911 call summoning medics, newly-released by police, a frantic woman, thought to be Woods' wife, Elin, is heard saying, "Oh, my god. ... My mom just collapsed! ... She collapsed in the bathroom. What do I do? What do I do?"

Once again, throngs of reporters were at the mansion and hospital looking for answers, and getting few. It turns out Barbro may have been suffering from nothing more than food poisoning, though the hospital wouldn't confirm it, Cobiella says. They also wouldn't say whether Tiger was at the hospital with her.