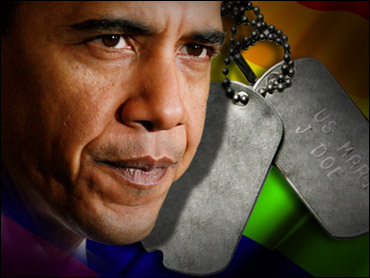 Defense Secretary Robert Gates is encouraging Congress to act before year's end to repeal the ban on gays serving openly in the military. It's a position shared by his boss, the president.

But his new Marine commandant thinks otherwise and the Senate has not yet taken action, setting up yet another hurdle for gay activists who see their window quickly closing. After Tuesday's elections that saw Republicans chip away at Democrats' majority in the Senate and wrest the House from their control, their hopes for ending the 17-year-old law have dimmed.

"I would like to see the repeal of 'don't ask, don't tell,' but I'm not sure what the prospects for that are and we'll just have to see," Gates told reporters traveling with him to Australia this weekend.

Gates has said he would prefer Congress act after the Pentagon releases its study of how repeal would be implemented, which is due Dec. 1.

That goal, though, lacks the backing of the Marine Corps commandant at a moment the country is fighting wars in Iraq and Afghanistan.

"This is not a social thing. This is combat effectiveness," Gen. James Amos said.

That hesitation could be enough to give senators permission not to act, activists fear.

The House has passed legislation repealing "don't ask, don't tell," but it has not yet seen a vote in the full Senate, where Democrats don't have the votes to overcome a Republican filibuster. Democratic leaders say they're trying to reach a deal across the aisle now that Election Day has passed.

"The Senate should call up the defense bill reported out of committee and pass it before it goes home for the year," said Aubrey Sarvis, executive director of the Servicemembers Legal Defense Network. "If the president, Majority Leader Reid, Secretary Gates and a handful of Republican senators are committed to passing the comprehensive defense bill, there is ample time to do so."

Gay activists worry the repeal could be stripped from the bill that funds the Pentagon.

"Any talk about a watered-down defense bill, whereby the 'don't ask' revisions would be stripped out, is unacceptable and offensive to the gay and lesbian service members who risk their lives everyday," said Sarvis, whose organization provides legal services for gays and lesbians who face discharge.

Obama on Wednesday also said he wanted a repeal before the new Congress arrives.

"This should not be a partisan issue," he said. "You've got a sizable portion of the American people squarely behind the notion that folks who are willing to serve on our behalf should be treated fairly and equally."

A Gallup poll in May found 70 percent of American favor allowing gays and lesbians to serve openly.

The legislative countdown comes as a parallel effort to end the ban continues in court.

Last month, the Pentagon was forced to lift its ban on openly serving gays for eight days after a federal judge in California ordered the military to do so. The Justice Department has appealed, and a federal appeals court granted a temporary stay of the injunction.

The Pentagon, meanwhile, is in the midst of a study of how it would implement a repeal should Congress act. Leaders of that effort have said a hasty pace and inadequate protections for gay and lesbian military members could be a disaster.

The White House had hoped lawmakers would delay action until the Pentagon had completed its study so fellow Democrats would not face criticism that they moved too quickly or too far ahead of public opinion in this election year. House Democrats would not wait. Administration officials joined the negotiations to make certain a repeal was not done too quickly.

Obama, Gates and Adm. Michael Mullen - the top uniformed military official in the country - have spoken in favor of repeal but have emphasized that it must be paced. The White House's favored plan could give the Pentagon years to implement the repeal process and would require the approval of Obama, Gates and Mullen, the chairman of the Joint Chiefs of Staff.

In a speech last year at the Army War College, Gates noted that the 1948 executive order for racial integration took five years to implement.

"I'm not saying that's a model for this, but I'm saying that I believe this is something that needs to be done very, very carefully," he told the audience.

"Don't ask, don't tell" was imposed by a 1993 law intended as a compromise between President Bill Clinton, who wanted to lift the ban on gays entirely, and a reluctant Congress and military that said doing so would threaten order.

Under the policy, the military can't ask recruits their sexual orientation. In turn, service members can't say they are gay or bisexual, engage in homosexual activity or marry a member of the same sex.

Between 1997 and 2008, the Defense Department discharged more than 10,500 service members for violating the policy.