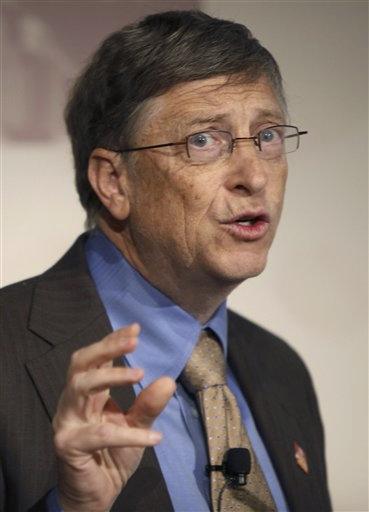 SEATTLE (AP) - Bill Gates says he feels a responsibility to speak up for the world's poorest because they're likely to be hit hard as economic woes force governments to reduce contributions to foreign aid.

In his third annual letter, issued Monday, the co-chairman of the world's largest charitable foundation expressed concern about budget cuts to the programs that transfer dollars from rich nations to poor ones, providing medical assistance, food aid, vaccines and other help.

The Microsoft co-founder and chairman says in the 24-page letter that not only is helping the poor with their medical needs and giving them the tools to be self-sufficient the right thing to do, it's also a good investment.

"Securing the conditions that will lead to a healthy, prosperous future for everyone is a goal I believe we all share," wrote the co-chairman of the Seattle-based Bill & Melinda Gates Foundation.

In the letter, Gates outlines the ways helping people saves money over the long term: from cutting the cost to treat the sick by preventing their illnesses to increasing a child's earning potential and future contribution to society through education. He said British Prime Minister David Cameron gives him hope that not all countries have forgotten about the needs of the poor, noting that the United Kingdom has kept its promise to grow foreign aid spending despite the need to cut other programs.

"It is inspiring to see a leader stand up for what he believes is right, even when it isn't easy," Gates wrote.

A large chunk of his letter this year focuses on one disease - polio - an illness many people thought had been eradicated. The disease did disappear from most developed nations decades ago, but it still exists in more than a dozen countries. Late last week, the foundation announced a new financial commitment of $102 million toward the goal of worldwide eradication.

Gates said it will take aggressive campaigns to give polio vaccines to all children under 5 in poor countries, at a cost of nearly $1 billion a year to give the world a chance at eliminating polio. He admitted to being overly optimistic about polio eradication in 2003, saying the world was only a few years away from ending polio. The disease started to spread again during that time.

"The experience of 2003 serves as a reminder to be humble as we move forward. But humility does not mean fatalism," he wrote.

The rest of his letter, which reads more like a cross between an annual report and an extended blog entry, shares short stories on the current direction of the Bill and Melinda Gates Foundation.

Gates says vaccines are the most cost-effective health tool ever invented. He reminds his readers that 1.4 million children will die this year from diseases for which there are already vaccines - like measles, pneumonia and tetanus.

Melinda Gates has made maternal and child health issues her special focus. Gates writes that progress has been made in this area as well, but more than 8 million children under 5 still die every year.

He said he is getting frustrated with the slow progress in the fight against AIDS.

"I am willing to be viewed as a troublemaker by people who are happy with the status quo," he wrote.