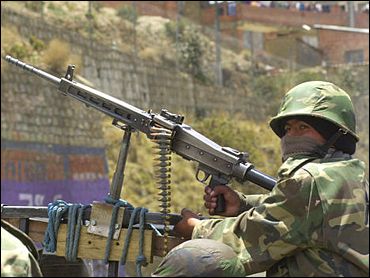 Soldiers patrolled the streets after Bolivia's president declared martial law in the city of El Alto to quell bloody protests over a proposal to export gas to the United States and Mexico. Sixteen people were reported dead in the unrest.

Those deaths would bring the total killed to 16 in El Alto since the clashes began. The government earlier reported that 11 people had been killed.

That figure included a 7-year-old boy killed Saturday by a stray bullet.

"It was Juanito, my only son," his mother, Eva Mollericano, told The Associated Press. "We came out to the terrace of our house when we heard the shootout and a bullet hit him in the head. He collapsed, he was dead."

The demonstrators are angry about a plan proposed by President Gonzalo Sanchez de Lozada to export gas from Bolivia's mammoth reserves in the southern region of Tarija to the United States and Mexico.

The demonstrations are the latest to plague Sanchez de Lozada, who has faced a series of violent protests by workers and indigenous leaders opposed to his free-market policies. He grew up in the United States and has staked much of his political fortunes on his relationship with the Bush administration.

Presidential spokesman Mauricio Antezana accused demonstrators of trying to overthrow the government, an allegation the administration has made previously.

Antezana said the military decided to lock down El Alto after demonstrators attacked soldiers Saturday night with firearms and rocks.

He said martial law was necessary "to ensure the safety of its citizens and protect public and private properties."

The protesters are partly upset that the government might decide to ship the gas out of a port in Chile. Bolivia has been a landlocked nation since it lost its coastline in an 1879 war against Chile, and resentment against its neighbor is still strong.

The government calls the protests unjustified, saying details of the project aren't even finished yet. Sanchez de Lozada, while admitting that a Chilean port would be technically and economically more convenient, has said that he would prefer a Peruvian port.

Despite the violence, authorities succeeded in driving 12 trucks with gasoline into La Paz, where a fuel shortage had become acute because of the violent protests, as supplies to the capital city must transit through El Alto.

Long lines of cars waited at gas stations as the trucks with gasoline, under heavy guard by soldiers in full combat gear, arrived in the city.
By Carlos Valdes