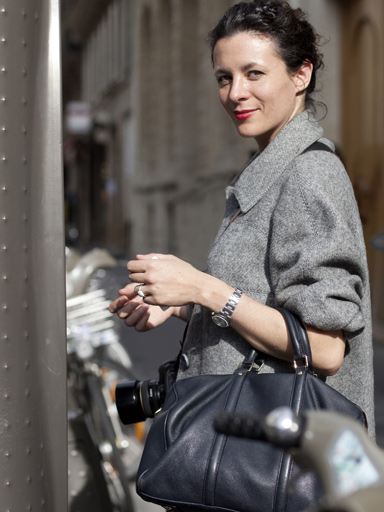 (CBS News) Garance Dore, a French illustrator-turned popular fashion blogger and photographer, is preparing to take on Fashion Week, which is actually more like Fashion Month for her as she prepares for Fashion Week events in New York, London, Milan and Paris.

For Dore it all begins in New York, a place she now calls home. It is here that she will kick off the second season of her web series "Pardon My French,"  which she describes as something of a "reality show."

"The show is following me everywhere I go. It can be on location where the [fashion] show is or it can be outside. It depends on what I see as inspiring," she told CBSNews.com.

The show sometimes includes her boyfriend Scott Schuman, creator of the popular street-style blog "The Sartorialist." Dore says their relationship is also a creative one.

"We are each other's main editor. He has a good eye and he knows what I want to do," she said. "He inspires me a lot with his work and his vision and also with all the books he buys."

The two, who "always travel together for fashion week," are now preparing for a month full of fashion, starting Sept. 6.

At New York Fashion Week, while there are no new brands to blog about, Dore is looking forward to seeing some of her favorites, who include Alexander Wang.

"In New York, it's always the same that I'm excited about, but there are a few newer brands that I really love. Suno, for example."

Fashion Week for Dore is very planned - waking up early to finish blogs, editing video late into the night with her team - but her schedule isn't completely set in stone.

"If there is a party, all the schedules are in the trash and we just try to hang on to basically what we can and work late and wake up super early to make up for that."

It is this spontaneity that she carries over into her outfits for the week as well.

"It's planned, but it's not outfit after outfit," she explained. "I tried to do that last season. It doesn't really work for me. I like it more natural. I wake up and it depends on how I feel."

Effortless style is something that Dore is known for and something she plans to embrace for fall as well, tweaking outfits she already has by styling them differently or adding a piece.

Dore recently lent her creative eye to Kate Spade for a collection that featured her illustrations as prints for various accessories and clothes. But, the blogger doesn't see herself starting her own brand anytime soon.

"I like to keep some focus with what I do and the blog is very important to me," she explained. "If I do something else, I would like to have the time to do it right. And, I'm not a designer. I have some ideas for things that I can do in that field, but launching my own brand is not really it."

This week, Dore re-launched her blog with a new design and features, including a newsletter for subscribers.