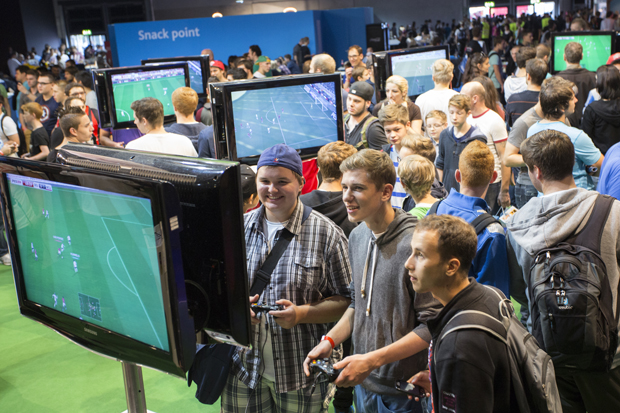 The biggest battle in the video game world isn't happening between superhuman avatars on screen, but between Microsoft and Sony.

On Tuesday, both companies held press briefings at the annual Gamescom trade fair in Cologne, Germany, focusing on games and new features for their respective consoles.

Focusing on exclusive games, Microsoft announced highly-anticipated sequels to popular games and updates to its Xbox One consoles. In total, it said that there would be "hundreds" of new games from independent developers, according to Gamespot's liveblog.

"Fable Legends," the multiplayer role-playing game that was announced at last year's Gamescom, will finally be available as a beta version on Oct. 16, reports Gamespot. "Forza Horizon 2" will launch in September for Xbox One and Xbox 360, while "Halo 5: Guardians" will be available on Xbox One by the end of the year.

The sequel to the popular game "Tomb Raider" will be an Xbox exclusive, launching in late 2015.

New features were also announced for the console, including a new "Friends" section that allows gamers to stay up-to-date with their friends; a "Snap Center" that will allow gamers to switch back and forth between games, Messages, friends and achievements; an Xbox One Digital TV Tuner; Stream TV and Boot-to-TV. The console is also preparing to launch in 29 more countries over the next few weeks.

Microsoft and its Xbox One have been playing catch-up all year with rival Sony and its PS4. In July, Microsoft reported that Xbox One sales more than doubled in June and showed "solid growth" in Xbox 360 sales.

Its rival, on the other hand, seemed unfazed by Microsoft's new games and console features. In fact, just as the company had at the E3 expo in June, Sony seemed to be doing victory laps around Microsoft.

Keeping with the steady sales trend it has had all year, Sony announced on Tuesday that it had sold 10 million PlayStation 4 consoles. An upcoming exclusive game for PlayStation, "Destiny," was the most preordered new IP in history, according to GameStop. A number of new games were announced -- "more games shared tonight than at any other Gamescom," according to Gamespot.

Like Microsoft, Sony also announced new features for its PlayStation 4 gaming console, such as SharePlay, the ability to search for PlayStation Network users by their real name, and uploading saved videos directly to YouTube, reports Gamespot. Described as a "virtual couch," SharePlay will allow users to invite a friend to join their games -- "just as if you were together in the same room," Scott McCarthy, Playstation's Director of Product Planning and Software Innovation, wrote in a blog post.