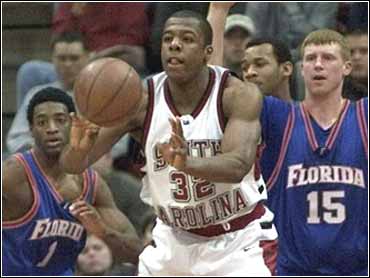 South Carolina's Travis Kraft learned something about himself. Florida coach Billy Donovan hopes his team has, too.

Kraft, a sophomore 3-point specialist, didn't get in until there were 19.6 seconds left. But that was enough for him to hit the game-winning 3-pointer estimated at 25 feet at the buzzer as South Carolina opened the Southeastern Conference season with a 69-68 victory over the fifth-ranked Gators on Sunday.

"Before the game and at halftime, coach (Eddie Fogler) personally said, 'Travis, be ready we may need you,' " said Kraft, who is 2-of-9 from long range this season. "When he says that, I'm supposed to be a shooter."

The Gators (10-2, 0-1 SEC) played without injured star Brent Wright and leading scorer Udonis Haslem was held to four points because of foul trouble. But up 63-53 with 4:49, they looked like they would survive.

Even in the final moments ,things looked promising when Matt Bonner, who led the team with 18 points and 15 rebounds, stepped to the foul line with 11.5 seconds left. But he missed, giving South Carolina a final chance.

"Maybe we played more not to lose instead of to win," Donovan said. "A lot of those guys have never been in a situation like this."

The lineup Florida hoped to have at end didn't materialize. Point guard Teddy Dupay had fouled out. Haslem, Donovan said, was never a factor. Wright was on crutches with a stress fracture.

"I think this could help us down the road," Donovan said.

That was hard for Bonner and his teammates to think about.

"We just lost on a shot at the buzzer," said Bonner, eyes red as he spoke. "We just didn't make the plays we needed to make."

Bonner, who missed a one-and-one attempt just second before, missed a second foul shot with Florida ahead 68-66 to set up the final crazy moments.

Kraft made the only play he was asked to execute.

He inbounded the ball to Calvin Clemmons with 2.5 seconds left.

"I was looking for it right away," Kraft said.

Clemmons passed it right back and Kraft swished his long shot and sent the Carolina Coliseum into hysterics.

"I don't know if it's hit me yet," said Kraft, who was buried by fans and teammates as soon as the ball went through.

Kraft was pretty much alone for the shot. Donovan said coaches pointed out Kraft's 3-point prowess, but "even if we had a hand in his face, when you make a shot like that, you've got to give him credit."

Fogler said his team was fortunate to win at the buzzer, "but luck's part of it. I'm more pleased with how down 10 we put ourselves in position to be lucky."

"We just made too many mistakes here," Bonner said.

Lucas' driving layup try with 13 seconds remaining fell short and was rebounded by Bonner. "I didn't know if we'd get another chance," Lucas said. "I thought maybe that was the ballgame. It's great to win like this because it gives us confidence."