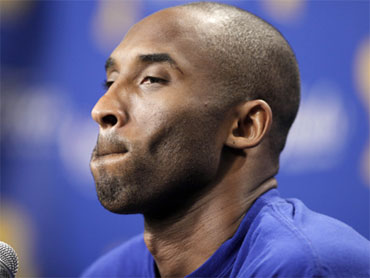 Even when Lamar Odom was a kid with limitless imagination growing up on New York's playground courts, he thinks he might have dismissed Thursday's season finale as a bit too extravagant.

When the Los Angeles Lakers take on the Boston Celtics in Game 7 of the NBA finals, Odom realizes it's a fantasy come true for any basketball player with the audacity to dream this big.

"It's historic, especially when you talk about these teams and what they stand for, the pride," the Lakers forward said Wednesday. "This is what you envision when you're a kid in your backyard. Counting down, 5, 4, 3, 2, 1..."

Another memorable chapter in the NBA's best rivalry will end with a coronation at Staples Center, where the defending champion Lakers will try to earn their 16th banner while denying Boston its unprecedented 18th title in the clubs' second finals meeting in three years.

For the fifth time in their 12 finals meetings, Boston and Los Angeles need all seven games to decide it. Each previous time it went to Game 7, the Celtics won - but when the current Lakers and Celtics take the court for the NBA finals' first Game 7 since 2005 and just its second in the past 16 years, most will try awfully hard not to think about the history and pressure heaped on their shoulders.

It's fine for kids and historians to savor this scenario, but Kobe Bryant knows it's not a good idea for players to get caught up in it.

"It's got nothing to do with me," said Bryant, the series' leading scorer with 29.5 points per game. "(When) I look back, years from now, or even when I was a kid, (if) you'd talk about being in this situation, I'd be really excited. But when I'm in the moment right now, I've got to play. I've got to focus on that. I can't focus on the hype about it."

Although Boston has the rivalry's Game 7 history on its side, the Celtics have plenty stacked against them after an embarrassing 89-67 loss in Game 6 Tuesday night. Most glaringly, Boston won't have starting center Kendrick Perkins, who sprained multiple ligaments in his right knee in the first quarter.

The Celtics' starting five has never lost a playoff series, but that five must change for Game 7. Although Perkins is a role player next to Boston's Big Three and point guard Rajon Rondo, the Celtics must hope veteran Rasheed Wallace and youngster Glen Davis can make up for Perkins' inside defense and rebounding.

No visiting team has won an NBA championship in Game 7 since the Washington Bullets did it in 1978, yet the Celtics are a whole lot more worried about the Lakers than the Hollywood crowd.

"I just love the pressure," said Paul Pierce, who leads the Celtics with 18 points per game. "I love the fact that I get to play against the Los Angeles Lakers in a Game 7 on the road. I love the fact that if I don't win multiple championships that I probably won't be mentioned amongst the other guys in Celtic history that have done it before. That type of stuff motivates me. That's what the challenge is for me, every time I put on this Celtic uniform."

Pierce is usually the only player in this series who embraces its history, yet it's too soon to say where these finals will fit in the rivalry's annals. Although the games had been uniformly competitive before the Lakers' blowout win in Game 6, they haven't been spectacularly played, with gritty defense trumping offense in most of the major moments.

Ray Allen's historic 3-point shooting barrage in Game 2, the Celtics' gritty victories in games 4 and 5, the Lakers' blowout win in Game 6 - all will be dwarfed by what happens in the deciding game.

"I guess it's going to be another decade that people look back and see the formation of this rivalry again," Lakers coach Phil Jackson said. "The '90s was missed, and the '70s was missed, but the '60s and the '80s were big decades. It seems to skip a decade, doesn't it?"

The Celtics have more experience in seventh games than the Lakers over the past three years, playing in two deciding games in 2008 and two more last year. Boston coach Doc Rivers thinks his club's big-game toughness mostly grew from those high stakes.

"It's the ultimate players' game," said Rivers, a New York guard when the Knicks lost Game 7 of the 1994 finals in Houston. "Unfortunately, I've coached in a lot of them over the last few years - or fortunately. All the things you've worked on all year, you have to do it, and execute it, and trust and play."

Los Angeles is in just its second Game 7 of the past three seasons, but that's because the Lakers have been better at avoiding trouble while winning 10 playoff series since Pau Gasol joined them in 2008. When faced with elimination Tuesday for the first time in these playoffs, the Lakers responded with determination at least partially born from fear, according to Gasol.

"I think about how bad and how much it would hurt if we don't come out as winners," Gasol said. "I keep that thought in my mind sometimes, just to understand that I have to do everything possible out there to help my team in any way I can. You want to leave everything you have out there, and compete as hard as you've ever competed."

Los Angeles has won three more titles since Bryant and Shaquille O'Neal returned the club to NBA prominence by winning the 2000 championship, but the Lakers clinched all three of those crowns on the road. They haven't celebrated at home since beating the Indiana Pacers a decade ago.

The Lakers weren't discussing the prospect of a party on Figueroa Street during their light workout Wednesday, and the Celtics weren't making plans for a raucous plane ride back to Boston. Given the weight of history and the intensity of this rivalry, both teams thought it best not to think beyond Thursday night.

"It's all-out," Boston's Kevin Garnett said. "It's for the marbles, it's for everything, all-out. You save nothing. You leave nothing."