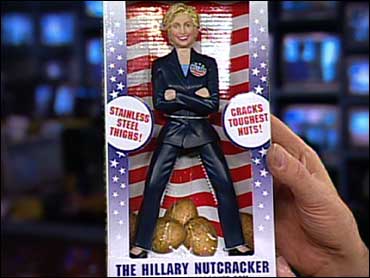 
Nothing says "Christmas" like a nutcracker. But when that nutcracker is a figurine of Sen. Hillary Clinton, it has a different meaning altogether.

With her stainless steel legs and crossed arms, the effigy seems ready to crack even the toughest nuts without so much as soiling her navy pantsuit. The nuts, by the way, are not included.

"It's my biggest seller," says Gary Apple, the founder of Stupid.com. "This year, more than ever, political stuff is just flying off the shelves."

Just Google "political gifts." There are thousands of Web sites specializing in T-shirts, coffee mugs, and tacky treasures featuring all the Washingtonians you either love or hate. And in true bipartisan fashion, the chatzkas cut both ways.

Alongside Hillary Clinton's nutcracker, you'll find a wide variety of trinkets featuring President George W. Bush. His head tops a toilet bowl cleaner, giving Democrats the chance to give him the ultimate swirly. A countdown clock keychain ticks off the minutes until the presidential inauguration in 2009.

Fido can even get in the game. President Bush doggie chew toys are big sellers. But, to be fair, the John Kerry chew toy sold in a greater volume back in 2004, according to Apple.

Action figures are popular this year, as well. Sen. Larry Craig's plastic likeness is wearing camouflage cargo pants and a micro-T with the slogan "I'm not gay," emblazoned across his pecs in bright orange. If you push a button in back, he recites his infamous press conference in which he denied the Minneapolis toilet shenanigans.

The Ann Coulter action figure is stick thin with long blonde hair and a trademark black miniskirt. She also speaks, but ironically she malfunctioned when shown to CBSNews.com.

Depending on where you stand on global warming, the land on the world map slowly fades away when heated on "An Inconvenient Coffee Cup." If you think climate change is overrated, try the "Al Gore is Inconvenient" mug from Cafepress.com.

The choices are endless, and with a month to go before the Iowa caucuses they are sure to be stocking stuffers for politicos and armchair pundits everywhere.

"We now have two-year long campaigns ever-present punditry and never ending coverage of it all," said CBSNews.com Senior Political Editor Vaughn Ververs. "To paraphrase Jimmy Buffet, if we weren't all laughing we would go insane."

And the retailers are crazy like a fox, as usual.