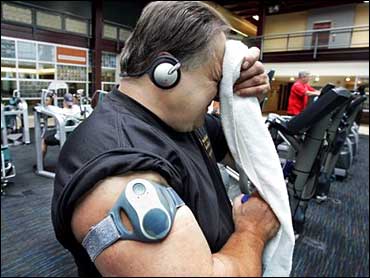 Forget just feeling the burn. Some people tired of the treadmill and frustrated with food diaries are turning to pricey gadgets that can help them see the burn.

Companies including Nike, Polar Electro and Timex that offer such gadgets as pedometers and heart monitors to help people fine-tune their workouts have started adding calorie counters and special Web sites.

Experts say the calorie-counting gadgets are far from 100 percent accurate but better than the guesswork most people use.

"It seems simple, if you expend enough calories, as many as you consume, you won't gain weight. But it's not easy for the average person to know--How many calories I'm using in that workout, that aerobic dance class I just did," said Janet Rankin of the Institute for Biomedical and Public Health Sciences at Virginia Tech.

"In general people are going to overestimate. I think these kind of tools can provide a little bit of a reality check and serve as a marker for improvement," she said.

The arm bands, chest straps and wrist bands try to offer a glimpse of information that can typically be seen only in a lab. The calorie counters are based on two methods researchers use: how much oxygen is being used and how much heat is being produced.

Most of the calorie counters on the market use a chest strap to measure heart rate. While exercising, the harder the heart works the more oxygen is used and the more calories burned.

Nike has at least three heart rate monitors that try to count calories, including the $99 Imara HRM and SDM Tailwind and the $109 Triax C-6.

The Bodybugg, the latest gadget, uses a different method. It has sensors that measure skin temperature, its electrical conductivity and how much heat someone's body is producing and losing. (It doesn't have a heart monitor, but the manufacturer, BodyMedia, is working on a way to measure heart rate through the upper arm).

All the energy used by the human body is eventually turned into heat; the more heat the body produces, the harder it's working. Sweat, like water, conducts electricity, so the more electricity the skin conducts, the more someone is sweating.

The Bodybugg costs $300 to $500 and is only available through gyms with agreements with Apex Fitness Group.

Apex unveiled the arm band at more than 1,000 gyms nationwide this month, including Gold's Gym and World Gym, and plans to sell the Bodybugg outside gyms soon.

People who use the Nike, Polar and Timex models can keep tabs on their calorie burn by pushing a button and glancing at their wrists, while the Bodybugg has no display. Users must go online. (The gadget's maker, BodyMedia, says a display may be added in later models.)

While the manufacturers tout the accuracy of their calorie counters most commercial products will likely overestimate the number of calories burned by 15 percent to 30 percent, according to David Bassett, a professor at the University of Tennessee.

"Measuring energy expenditure for most of us is a pipe dream. In a free-living individual it is not possible to do," Bassett said, though he added that the current crop of products is a good start.

But the new fitness gadgets have their faithful like 43-year-old Jennifer White from Bend, Ore., who's tried to lose weight since her teen years.

The Bodybugg and the Web site helped her cut back on high-calorie, high-fat foods and stay active without always going to a gym. She says she's lost 24 pounds in three months.

"I think I tended to overdo my workout," she said. "I would go to the gym and I would think, 'OK. I've got to run on the treadmill.' I would push myself too hard too fast and I'd burn myself out before I even got going."

Besides offering an estimate of calories burned, some of the counters can also be used with personalized Web-based food diaries and workout plans.

Once online to chart their progress, Bodybugg users also have access to a database of more than 20,000 foods including items from many chains such as Starbucks, McDonald's, Wendy's and Burger King.

Users say once they get the hang of it, they can log their meals in less than five minutes.