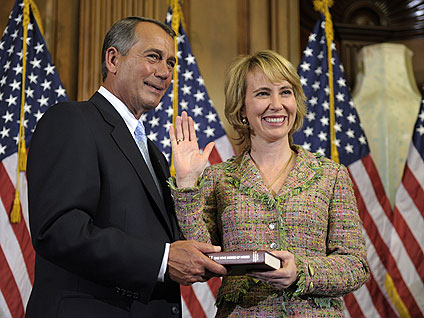 Congresswoman Gabrielle Giffords of Arizona is in critical condition today after being shot in the head during a town hall-style meeting with her constituents in Tuscon.

The 40-year-old Democrat, born and raised in Arizona, has built a reputation as a true centrist. She supported President Obama last year on controversial issues like health care reform, but she has also taken a firm stance on ratcheting up security along the U.S.-Mexico border.

"Whether you are a Republican rancher, an independent small business owner or a Democratic Air Force veteran, she fights for your needs every day in Congress," reads Giffords' campaign website.

Many of the congresswoman's colleagues saw her last on Thursday, when the House read the U.S. Constitution aloud. Giffords read the First Amendment, which protects one's right to peaceably assemble, among other things. Giffords' peaceful meeting with her constituents was tragically disrupted when alleged gunman Jared Loughner killed at least five people.

Giffords has strived to develop a reputation as a strong defender of the Second Amendment. Her campaign website says Giffords is a longtime gun owner who joined an amicus brief in 2008 to ask the Supreme Court to uphold gun ownership rights in Washington, D.C.

The Democrat had just started her third term in Congress after a competitive race against Tea Party-backed Republican Jesse Kelly.

Giffords faced a great deal of backlash last year from conservatives who were upset over her support for health care. In fact, she was one of several Democrats whose offices were vandalized after the reform laws passed. She also came under the spotlight last year after it was revealed she was one of three Democrats who received a donation from liberal MSNBC host Keith Olbermann, which led to a short suspension for the host from the cable channel.

She took a hardline stance on border security, however, and joined a group of congressmen -- mostly Republican -- who asked the president to send National Guard troops to the Southern border. Giffords was one of the first to note when the president met the request, but she remained critical of the president on the issue of border security.

Giffords has in other ways shown her political independence; she was one of 19 Democrats who voted for someone other than Nancy Pelosi in Wednesday's vote for House Speaker. (She cast her ballot for Georgia Democrat John Lewis.) Following her swearing-in on Wednesday, the congresswoman introduced a bill to cut congressional salaries by 5 percent.

Touting her experience as a former small business owner (as former president and CEO of El Campo Tire), Giffords is part of the moderate Blue Dog Democrat coalition and the business-friendly New Democrat Coalition.

Giffords was elected to Congress in 2006 after Republican Rep. Jim Kolbe retired. Before that, she served in the Arizona state legislature.

Giffords is a third-generation Southern Arizonan. She is married to Mark Kelly, an astronaut who is scheduled to command the Shuttle Endeavor when it launches in April.