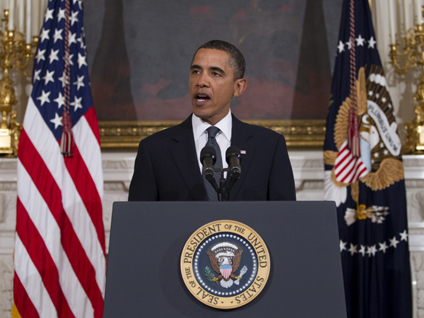 President Obama said today that this morning's shooting of Rep. Gabrielle Giffords and others in Tuscon a "tragedy for our entire country."

At least five people were killed in the shooting, including Federal Judge John Roll and a nine-year-old girl. The gunman, allegedly 22-year-old Jared Loughner, opened fire at a supermarket where Giffords was meeting with constituents.

Giffords was shot in the head, but doctors said this afternoon that she had come through surgery and that they were "very optimistic" for her recovery.

Boehner on Giffords: "Attack on All who Serve"
Special Section: Tragedy in Tucson

"I am hopeful that she is going to pull through," Mr. Obama said in a statement from the White House. He called on all Americans to keep "Gabby" and the others killed or wounded in their thoughts and prayers. The president called Giffords a "friend" and an "extraordinary public servant."

"It's not surprising that today Gabby was doing what she always does -- listening to the hopes and concerns of her neighbors. That is the essence of what our democracy is all about," he said. "That is why this is more than a tragedy for those involved. It is a tragedy for Arizona and a tragedy for our entire country."

The president also promised a comprehensive investigation into the shooting, saying he had directed FBI Direct Robert Mueller to Arizona to lead federal efforts.

The White House reports that since the incident the president has also talked to Arizona Gov. Jan Brewer and several congressional leaders, including House Speaker John Boehner and Minority Leader Nancy Pelosi. He also left a message for Giffords' husband, Navy captain and astronaut Mark Kelly.