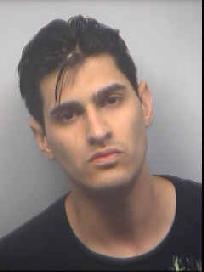 (CBS/AP) SANDY SPRINGS, Ga. - Emmanuel Alfredo Tadeo, a Georgia man, is due in court for allegedly killing his girlfriend's pet dog during an argument and using the corpse to beat the woman.

Tadeo, 27, is being accused of multiple charges, including aggravated assault, animal cruelty and battery, according to Fulton County prosecutors.

While allegedly kicking and beating his girlfriend, the dog came came to its owner's defense. After snapping the dog's neck, Tadeo beat the woman some more - with the animal's corpse, police told the Atlanta Journal-Constitution.

Tadeo had apparently been drinking heavily and allegedly caused what was described as "probably one of the worst cases of animal cruelty that we've ever seen," Sandy Springs police Capt. Steve Rose told the Journal-Constitution.

Andrea Jill Armintrout, the female victim, was arrested and charged with obstruction after police say she stopped cooperating with investigators.

Shortly after the May 19 incident, Tadeo was charged with misdemeanor animal cruelty and battery and was released after posting bail June 14. After prosecutors upgraded the charges to felonies, he was re-arrested July 13 and has remained in jail without bail, according to the Journal-Constitution.