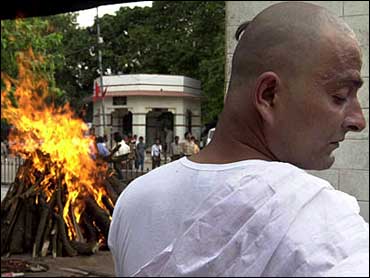 Tears rolling down his face, Bachchan Singh Bahadur poured cups of melted butter on the wood fire of his father's funeral pyre on the outskirts of New Delhi.

He was in keeping with a centuries-old Hindu funeral tradition, but it's also the stuff of ecological nightmares for the Indian government.

The 35-year-old government clerk could have used an electricity-powered crematorium less than half a mile away for just one-tenth of the price, but for him nothing would do except a wood-burning crematorium by the Yamuna River where the ashes would be tossed after cooling overnight.

"Unless the body is burned on a wood pyre, the soul does not get salvation," he explained. "When the flames leap up to heaven, then you get the satisfaction the soul is set free."

Nearly 20,000 Hindus die each day in this nation of 1 billion people. Each cremation requires an average of 650 pounds of wood. The result is denuded forests, rivers clogging up with human ashes or even body parts — and a wood trade said to be rife with corruption.

In the 1980s the government turned to electric furnaces, building scores of them in cities and towns along the Ganges River, whose waters are believed by Hindus to wash away sin and release the soul for its journey toward heaven.

But few Hindus have made the changes, and many of the electric crematoriums have fallen into disrepair.

One problem is frequent power outages.

"People don't have much faith in the electric crematorium. When the power goes off, the body can lie in the machine for hours. How can we heap such indignities on the dead?" said Ramesh Gupta, a shopkeeper attending the last rites for a relative at a New Delhi cremation ground.

"Imagine the distress to the family."

The bereaved are at the mercy, however, of a cartel of wood traders.

Some officials say wood traders collude with operators of the electric crematoriums to ensure that the furnaces malfunction or run short of diesel for their generators.

"They deliberately don't let the crematoriums function so that hapless people are forced to buy wood from them at exorbitant prices," said B. Sengupta, of the government's Central Pollution Control Board.

Varanasi, the holy city on the Ganges 395 miles southeast of New Delhi, attracts hundreds of thousands of people who cremate their dead and pour the ashes into the river to ensure "moksha," the final liberation of the soul from the endless cycle of reincarnation.

The ashes of millions of dead have helped turn the water into a stinking, polluted swirl. Worse, since wood is scarce and expensive, bodies sometimes are thrown into the river half-burned.

"Apart from the ashes, this is an even bigger environmental hazard for the Ganges River," said Sunita Narain, an activist with the Center for Science and Environment in New Delhi.

Environmentalists prefer electric furnaces because they don't need wood and they reduce the body to a small urnful of powdery ash that does less harm to the rivers.

Swami Agnivesh, a Hindu theologian and social activist, says the religion is flexible enough to accept technology. "Many Hindus would welcome the change, especially if they were made aware of the environmental consequences of wood cremation," he said.

New Delhi has 58 wood-burning cremation parks, like the one Bahadur was using, and four electric facilities. The government wants to build 13 more such furnaces in the capital, but environmentalists question whether it can supply the power to guarantee uninterrupted service.

A cremation at New Delhi's Nigambodh Ghat electric facility costs about $4, compared with $40 for a wood-log cremation.

Agnivesh said the government should do more to highlight the savings.

"The beauty of Hinduism is that it is not a die-hard philosophy," he said. "However, people have to be convinced before they make a change."