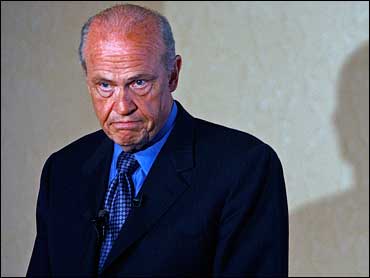 
The end of the year's third fundraising quarter means a lot for all the presidential candidates. But it may be especially meaningful for the race's latest entrant: former Sen. Fred Thompson, who is vying for the Republican nomination.

Like the other White House hopefuls, Thompson is expected to release highlights of his quarterly fundraising report at the end of this month. But while all the other candidates will be releasing their third reports, this will be Thompson's first - he only officially entered the race Sept. 5 after a lengthy "testing the waters" phase.

The "Law & Order" star hasn't actively competed in any straw polls and has yet to take the stage at a debate, making the report the first concrete measure of how Thompson's campaign is shaping up. As if that wasn't pressure enough, the first few weeks of Thompson's run haven't been greeted with the same glowing press coverage he received when he first started considering a bid in March. Stories in the national press have focused on high staff turnover, frustrations over the role played by his wife, Jeri Kehn Thompson, and his inability to galvanize the support of conservative Republicans, particularly the party's influential contingent of evangelical Christians.

Is the scrutiny perhaps a little unfair? People in Thompson's campaign seem to think so.

"The expectation level for everything we've done has been ridiculously and artificially high," Thompson communications director Todd Harris said. "Everything that we do is being judged through this ridiculously inside-the-Beltway prism ... I think it's more than a little unfair."

Harris said no rally attendance figure seems big enough to satisfy national political reporters and urges pundits to check out the local press coverage that is both more complimentary and more influential in shaping the opinions of voters in New Hampshire, Iowa, Florida and other key states.

But even if the focus on Thompson's fundraising numbers is disproportionate, there's no question that they are important to determining what effect he will have on the race for the Republican nomination. He runs second to Rudy Giuliani in national and some state polls, and even appears to be leading the pack in others. But much of that is based on buzz - his fundraising will reveal if he has the capacity to capitalize on it. Thompson will need plenty of money to build an organization that can compete with Giuliani and Mitt Romney, who tops the polls in Iowa and New Hampshire.

A disappointing number, which will cover all money raised since Thompson formed an exploratory committee in June, will resurrect questions about whether Thompson delayed his entry into the race too long - questions that first surfaced when the campaign reported slow fundraising before Thompson's official announcement. That news, other negative press coverage, and the delay of the campaign's kickoff from July to September all have the potential to further slow down efforts to raise cash.

While the situation may partly be a product of the press spinning expectations upward, it's also partly the Thompson campaign's fault, Republican consultant and CBS News political analyst Nicolle Wallace said. "I think that by allowing the buildup that they allowed by delaying that announcement by as much as they did, they almost made the bed that they have to lie in," she said. "But this is still only the third inning for those of us paying attention. For everyone else it's the preseason. I don't think anything that's happened to date is anything he can't recover from."

Wallace said that two other tests, aside from the first fundraising report, await Thompson: his first debate, scheduled for Oct. 9 in Michigan, and the organizational matter of getting on the primary ballot in all the necessary states. Passing all three hurdles, Wallace said, should be enough to return the narrative of the Thompson campaign to a positive tale.

What is considered "passing" in terms of fundraising? The Thompson campaign is doing its best to make sure the answer to that question isn't too high. "We'll certainly be behind Romney and Rudy, we're never going to raise the kind of money those guys are going to raise. But we'll also never spend the kind of money they're going to spend," Harris said. "We think that we are exactly where we need to be. And we're well on our way to reaching our finance goals."

But Fabrizio says Thompson will have to raise "well over $10 million" to satisfy skeptics. "If Fred Thompson showed up on reporting day and said he raised $20 million this quarter, that would floor everybody," he said. "If he shows up and says that since the beginning of June he only raised $10 million, everybody's going to go, 'Huh?' "
By David Miller