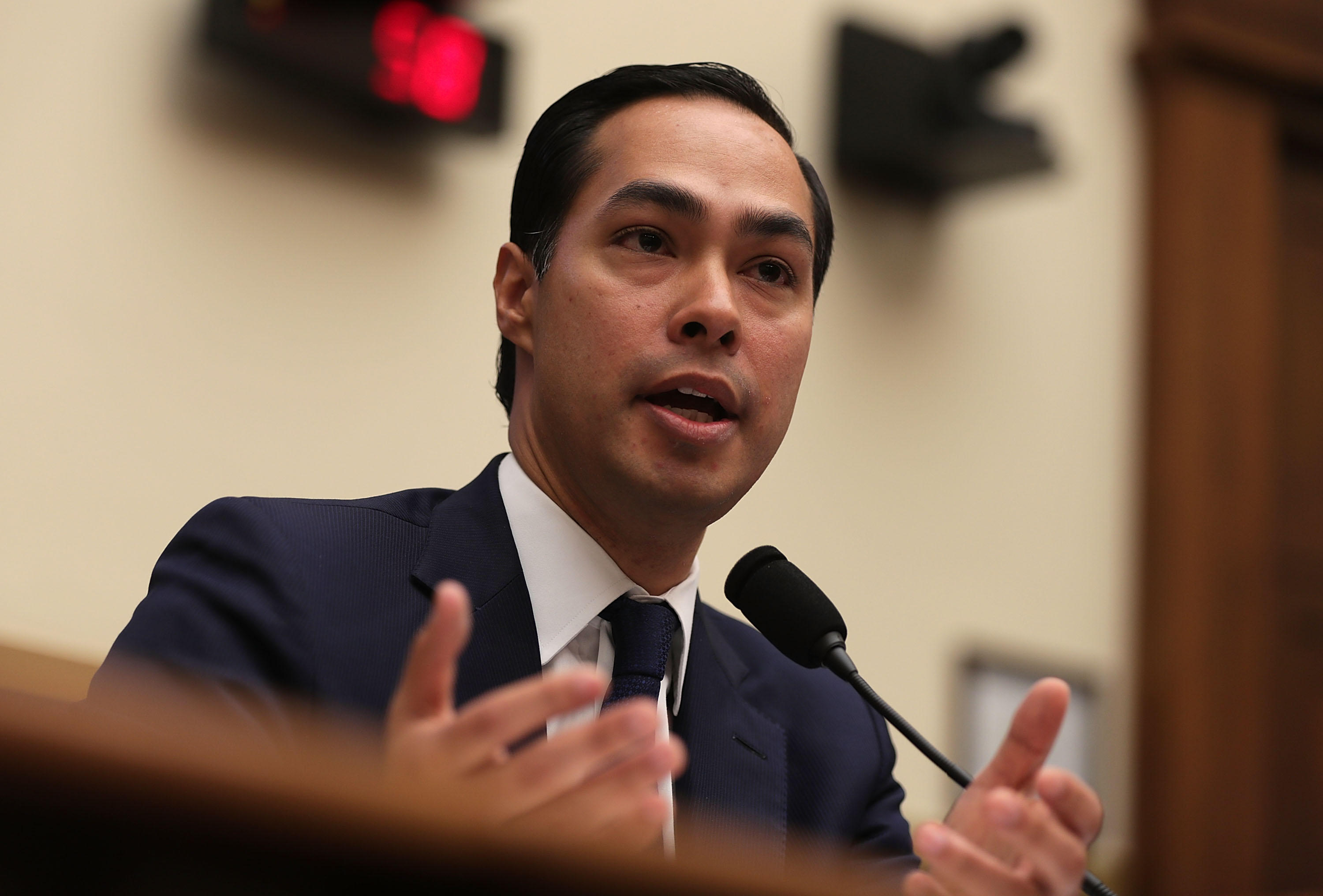 Read more interviews of 2020 candidates on "Face the Nation" here.

MARGARET BRENNAN: With dozens of Democrats considering a 2020 presidential bid on Saturday the former mayor of San Antonio, Julián Castro, became the latest candidate. Castro gained national attention when he delivered the keynote address at the 2012 Democratic convention and he was also secretary of housing and urban development during the Obama Administration. The grandson of a Mexican immigrant, Julian Castro has already been endorsed by a Democratic member of Congress, his twin brother, Joaquin. And Julian Castro joins us from the site of his announcement. Welcome to FACE THE NATION.

JULIÁN CASTRO: Thanks a lot. Great to be with you, Margaret.

MARGARET BRENNAN: The president visited your home state of Texas this week, went to the border, said there is a humanitarian and national security crisis. Do you agree with him that there is a crisis at the border?

CASTRO: What I believe is that he's created a tragedy at the border. This policy of separating children from their parents and the terrible way that Customs and Border Protection has managed its responsibilities, including the deaths of two children within the last few weeks. That's a real tragedy. And, you know, the folks down on the border know - and many of them have said - in fact, I just saw one border resident the other day on camera that said that a wall is not the answer. That we can have strong border security with personnel, with technology, but that the wall is not the answer. So the president may have his rhetoric but everybody else has the facts right that a wall isn't the answer.

MARGARET BRENNAN: Well that family separation policy has been paused at least. But there are a record number of family units crossing the border and that creates a lot of challenges. So what would you do? Would you extend the amount of time that families can be held together in detention?

CASTRO: I don't believe that we should have family detention for people that are seeking asylum or refugee status, so that we should develop other ways to ensure that people are processed, that we're able to keep track of them in the country. And we- we have developed some ways to do that but that we don't detain them the way that we have been. So no, I don't agree with that. The other thing I'll say Margaret, and this is very important is, I hope that folks remember that the president said that he wanted to do this family separation policy because it would deter more families coming from these countries. And actually the exact opposite happened. And so he's failed. He's a failed leader on this issue and now he's just trying to stoke his political base by bringing up the wall all the time. And it's just a failure of leadership all around. I would end this kind of family detention. I would make sure that we invest in sensible, smart and effective border security that includes personnel, that includes the smart use of technology, and that does not scapegoat these immigrants but tries to look for a way that we can get to comprehensive immigration reform to fix our broken immigration system.

CASTRO: Well, what I believe we could do and what the Obama administration did do I believe toward the end of its tenure was to look at things like ankle monitors so that you're able to monitor where people are in the country and ensure that they report back when they need to and that they are part of, you know, legal proceedings. But we also need to be serious about recognizing the right of people to seek asylum. And the president is playing games with this, blocking people's right to seek asylum. I would change that. I would make sure that we push as hard as possible for comprehensive immigration reform so that for the people who are already here, if they've been law abiding, if they pay a fine, that- that they can get an earned path to citizenship. I still believe that that should be part of the answer.

MARGARET BRENNAN: You announced your candidacy today and almost immediately the RNC issued a statement. I want to read it here to you. It says, "Julián Castro has made history by becoming one of the biggest lightweights to ever run for president. He was a weak mayor who couldn't even handle being HUD secretary. This is obviously just another desperate attempt to become someone else's running mate." These are sharp words, but it's the first official attack on you. How do you respond and- and how do you explain why you are qualified to be Commander in Chief?

CASTRO: Well first of all, I think they could just dust off those same words, you know they're going to use those kinds of words for every single Democrat that decides to run for president. I wouldn't put too much stock in that. I would just say to the American people directly, I've had executive experience. I've led one of the largest, most diverse cities in the country. I've led a federal agency at HUD and- and done some great work to expand opportunity. I know what it takes to ensure that we have a government that functions well and to help inspire people. I also have a life experience that I think resonates with a lot of Americans. You know I'm here in my neighborhood that I grew up in. Grew up in a single parent household, went to the public schools here in San Antonio. Was able to go to college and law school and to reach my American dream. And I am motivated to make sure that every American can reach their dreams. And then, I have a strong vision for the country's future. I want to make sure that in this century, this 21st century, that we are the smartest, the healthiest, the fairest and the most prosperous nation on earth.

MARGARET BRENNAN: You're going to have a- a lot of competition for the Democratic nomination. It looks to be a very crowded field. How are you going to distinguish yourself?

CASTRO: I'm going to articulate a very strong positive vision for the country's future. I'm going to get out there and work hard. I'm gonna make sure that I let people know what I've actually accomplished in the executive experience that I have. And I think that right now people are looking for a leader that can show they can get things done. Being a mayor is all about getting things done. And when I was cabinet secretary I got things done. They want government that functions well now and somebody that's trying to bring people together instead of tear them apart. So I'm going to go out there and make my case. And you know I'm under no illusion right now that- that I'm in the poll position or anything. I'm not a front runner but nobody who grew up here in these neighborhoods, including myself, has ever been a front runner. And I think in this country right now, that there are a lot of people who don't feel like front runners. And I'm going to go speak to them in this campaign.

MARGARET BRENNAN: Well some of the things you outlined as part of your platform today, Medicare for all, universal access to prekindergarten education, a Green New Deal, these put you in the more liberal or progressive wing of the Democratic Party. So one of the challenges for you is how do you attract centrists or people who perhaps were alienated by the president but aren't comfortable with being so reliant on the government as their main provider?

MARGARET BRENNAN: Medicare for all you mean.

CASTRO: And so I think- that's right. And I believe that this country is ready for that. Now you bring up the issue or one- one issue people bring up is OK well you know- of course, you know we're going to put forward a plan. And I'm sure people have other- have their own plans of how we would accomplish that. And I'm under no illusion that accomplishing something like Medicare for all would be easy. But I do believe that in this nation, in the richest nation on earth, that not a single person should be without health care when they need it. And so I believe it is worth it, that that fight is worth it. And whether people call themselves liberal or centrists or conservative, what they want right now is they want to know that- that you're coming at them straight and that you're being honest with them. And I'm going to be honest with folks.

MARGARET BRENNAN: So what is that going to cost taxpayers? Because Bernie Sanders, when he ran in the last campaign, had a universal health care call and estimates showed it costing one point four trillion dollars a year. You gotta make some real changes there to be able to pay for it.

MARGARET BRENNAN: What does that mean?

MARGARET BRENNAN: You want to increase the corporate tax rate?

CASTRO: --we need to ask them to pay their fair share. I think that we can consider different ways, different proposals, to be able to raise more revenue from the wealthiest corporations. I also think it's interesting, Margaret, you know, that I'm here in a neighborhood that was built up like a not- a lot of neighborhoods by small businesses. Little convenience stores, little restaurants, little dry cleaners. And at the same time, that a company like Amazon, that is one of the biggest companies in the world, can get huge tax- tax breaks, huge abatements, and also only begrudgingly end up paying their- their employees 15 dollars an hour.

CASTRO: We need to change that in this country.

CASTRO: Yeah, so I look forward during the course of- of this campaign to putting forward proposals on each of these things. And- and I think that- that a vast majority of the American people are ready for that.

MARGARET BRENNAN: All right. We will be tracking you and your campaign and more details as you promise them there. Thank you so much for joining us.

Castro defends debate attack on Biden: "I proved my point"
More
Thanks for reading CBS NEWS.
Create your free account or log in
for more features.
View CBS News In
CBS News App Open
Chrome Safari Continue
Be the first to know
Get browser notifications for breaking news, live events, and exclusive reporting.