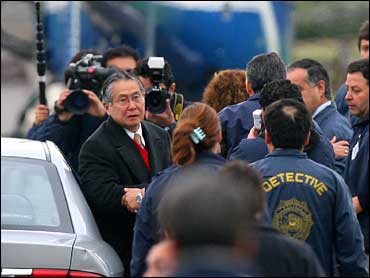 Former President Alberto Fujimori faces trial Monday on charges of using a death squad to kill leftist guerrillas and collaborators - a case stirring mixed emotions in a country where many admire him for defeating a bloody insurgency.

It is the first time in Peru's history that a former president faces a public trial for crimes committed during his administration - and one of the few cases of a Latin American leader being tried after leaving office.

Fujimori is charged with authorizing a death squad to kill nine students and a professor at La Cantuta University in 1992, and 15 people in a tenement in Lima's Barrios Altos neighborhood in 1991. If convicted, he faces up to 30 years in prison and a fine of some $33 million.

He also is charged with ordering the abductions of a prominent journalist and a businessman, who were interrogated by army intelligence agents and released. Fujimori, 69, denies involvement.

Elected in 1990, Fujimori initially received tremendous support for his crackdown on the Maoist Shinning Path guerrillas and his economic reforms, which ended hyperinflation inherited from the previous government and spurred record foreign investment.

In November 2000, he fled to Japan, his ancestral homeland, as his government collapsed in a corruption scandal involving his former spy chief, Vladmiro Montesinos.

In 2005, Fujimori moved to Chile, expecting to be extradited to Peru on minor charges and hoping for the chance to return to politics in his home country. He apparently miscalculated: Chile's Supreme court approved his extradition charges including human rights violations.

Relatives of the victims of the La Cantuta and Barrios Altos massacres will be present Monday when the trial begins at the police base on the outskirts of Lima where Fujimori is being held.

Raida Condor, mother of one of the university students who was kidnapped and killed, said she was ready to confront the former president.

"I, Raida Condor, mother of Armando Amaro Condor, his victim, will be there looking him in the face and asking him, 'Listen, why did you kill my son? What was his crime for you to kill him?"' she said.

But other Peruvians are trying to reconcile their admiration for Fujimori with the long list of human rights abuses leveled against him.

Peruvians have not forgotten the Shining Path, the car bombs, urban blackouts from sabotage and massacres of peasant communities by both sides in a 20-year war that left nearly 70,000 dead.

The civilian militias that Fujimori armed to fight the Shining Path in remote jungles feel abandoned by the presidents who succeeded him, and are outraged that he is on trial.

"It's not right if he had people killed in Barrios Altos like they say, but that is no reason to put him on trial. He did what he had to do. If some day he comes back to govern, we will be here to receive him," said Jose Luis Farfarn, 33, head of the militia in the hamlet of Triboline, in the isolated jungle-shrouded Apurimac valley.