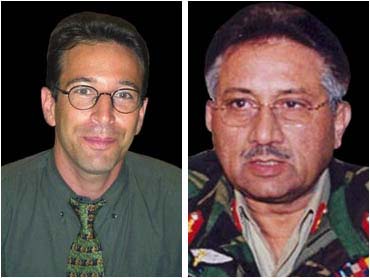 Amjad Hussain Farooqi has been missing since Pearl was abducted in the southern city of Karachi in January 2002 during what he thought was a meeting to interview a militant leader. Pearl's captors later beheaded him and released a videotape of his death.

On Friday, senior Pakistani security officials, speaking on condition of anonymity, said that Farooqi played a central role in two attempts to kill Musharraf last September by blowing up his motorcade, once by exploding a bridge it had just passed over and the second by having suicide bombers drive explosive-laden cars into the vehicles.

The announcements follow an interview with Musharraf broadcast Thursday where the president said that a Pakistani mastermind of the attacks against him remained at large.

Musharraf did not identify the mastermind. Other senior officials refused to comment Friday on whether Farooqi was the target of a new manhunt or to confirm if he played a role in the Musharraf plots.

Musharraf claimed that the rest of the network plotting the assassination attempts had been smashed. He said junior army and air force personnel had been arrested and suggested they had been paid for providing information about his movements and other details.

"The only person not there is this mastermind ... who planned it," Musharraf said. "That man is still at large. We will get him. We know exactly who he is."

Musharraf, who took power in a bloodless coup in 1999, has been the target of three known assassination attempts, the first in the southern city of Karachi in April 2002. It was blamed on a different group, though the alliances and overlapping membership of such organizations can make distinctions difficult.

The Washington Post, citing senior Pakistani officials, reported Friday that Farooqi recruited and supplied air force technicians with explosives to blow up the bridge used by Musharraf's motorcade in Rawalpindi, near Islamabad, on Dec. 14. No one was killed.

Farooqi is a leader of the Lashkar-e-Jangvi and Jaish-e-Mohammed extremists groups, which are believed to have links to al-Qaida.

After the kidnapping of Pearl, police arrested Ahmed Omar Saeed Sheikh, a British-born Islamic militant, and the others - Salman Saqib, Fahad Naseem and Shaikh Adil - on suspicion of their involvement in the abduction.

On July 15, 2002, a court in the city of Hyderabad convicted and sentenced Sheikh to death by hanging. The sentence has not been carried out. His three accomplices were sentenced to 25 years imprisonment. Farooqi and several other suspects remain at large.

Farooqi is believed to have taken part in the hijacking of an Indian airliner to Kandahar, Afghanistan, in 1999 that resulted in a hostages-for-prisoners exchange that feed Sheikh from an Indian prison.

Kandahar at the time was controlled by the Taliban regime, al Qaeda's host in Afghanistan, which had close links to elements of Pakistan's military and intelligence services before the Sept. 11, 2001, terror attacks in the United States.