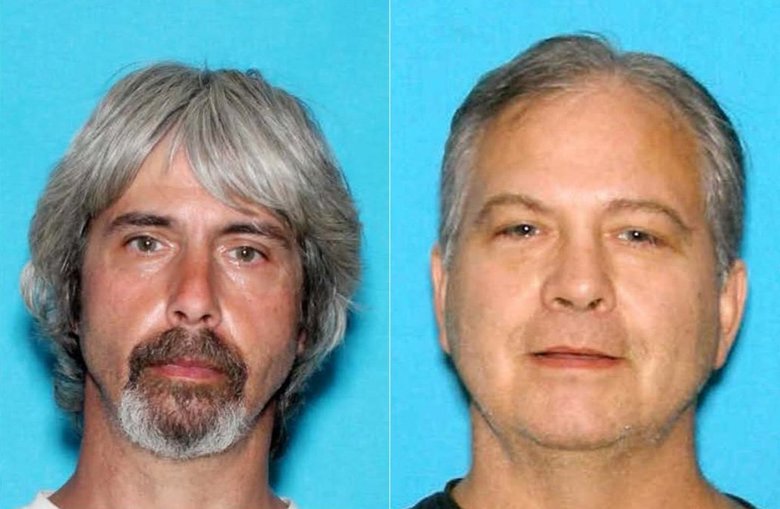 SEATTLE --Two brothers wanted in the disappearance and presumed slayings of a Washington state couplehave been charged with first-degree murder, and authorities believe they may be heading for the Mexican border.

Detectives found a red Volkswagen that had been driven by 53-year-old John Blaine Reed and his brother, 49-year-old Tony Clyde Reed, in Phoenix, but they said the suspects had since taken a 2002 gold Acura 32T with Arizona plate BNN-9968.A license plate reader captured that plate near Calexico, California, on Monday, the Snohomish County Sheriff's Office said.

Two friends of the brothers gave them the Acura and $500, knowing they were on the run from police, authorities said.

"The exact location of the Reed brothers is unknown, but there is reason to believe they may be trying to flee to Mexico," the sheriff's office said in an email Tuesday. It described them as convicted felons who should be considered armed and dangerous.

The brothers are wanted in the disappearance of John Reed's former neighbors, 45-year-old Patrick Shunn and his wife, 46-year-old Monique Patenaude, who were reported missing one week ago. A neighbor told police they had planned to go to a concert with the couple on April 11, according to a search warrant affidavit, but they stopped returning text messages. When the neighbors stopped by their Arlington home to check on them, they found the couple's dog which they said was "never left out" running loose, the documents said.

Since then, authorities said they've uncovered evidence indicating Shunn and Patenaude were murdered, and they've named Tony and John Reed as suspects. John Reed, the former neighbor, had been involved in a contentious property dispute with the couple, court documents show.

The couple's missing Land Rover and Jeep were found last week driven or pushed off a deep embankment, according to a search warrant affidavit. The Land Rover had apparently been initially stuck on the edge and "pried" over the embankment using some kind of digging tool, the affidavit said. The vehicles had cut branches tossed onto them, apparently in an effort to hide them from view, officials said in the document.

Investigators say blood stains and other evidence found at Reed's former property tie the brothers to the couple's disappearance. Charging documents filed Tuesday said authorities found blood in the home's bathtub, as well as in John Reed's pickup, the victims' vehicles, and on gasoline-soaked clothing found in bags underneath a mattress outside the home.

The state crime laboratory is analyzing the blood for DNA evidence.

Video surveillance footage also ties the two brothers to the disposal of the couple's vehicles, police told CBS affiliate KIRO. At 3:30 a.m. on April 12, a neighbor's surveillance camera caught the vehicles being simultaneously driven up the remote road on the way to where they were later discovered, a prosecutor wrote in the charging documents.

The camera also recorded John Reed's pickup traveling up the same road the next day, he said. Authorities found the pickup at the home of the brothers' parents, in the central Washington city of Ellensburg.

Clyde Reed, their father, told investigators he had just cleaned the truck and added "that he did not know where his two sons were, but if he did, he would not tell law enforcement," the charging papers said.

When the brothers left Ellensburg last Thursday, they were driving the parents' red Volkswagen - the same car authorities found in Phoenix, detectives said.

Tuesday, teams were searching a wooded 23-square-mile area around their home near Oso, 50 miles north-northeast of Seattle, for the couple's bodies.

Shunn and Patenaude had long worried about getting on the wrong side of John Reed, who lived a little ways up an old logging road from their 21-acre spread in the foothills of the Cascade Mountains. When they sued other neighbors over a property dispute more than two years ago, they avoided naming him as a defendant because they didn't want to irk him, their former lawyer said Monday.

"They weren't looking forward to any kind of conflict with Mr. Reed," the couple's former lawyer, Thomas Adams, said Monday. "They didn't want to provoke any kind of an issue with him."

A friend told police that Patenaude said Reed often acted "crazy" and was known to be aggressive and very angry about the civil action, according to the affidavit. The friend said Patenaude was afraid of Reed because of his threats.

The grim mystery played out on land abutting the nation's worst landslide disaster, the 2014 Oso landslide, which wiped out a rural neighborhood and killed 43 people. In an interview shortly afterward, John Reed told The Seattle Times he watched the slide as it roared past his front yard.

"This mountain of dirt taller than any trees near me cut off my view like a curtain," he said. "And it shot right in front of me, right by my house."

In the search warrant affidavit, a former Snohomish County Sheriff's Office reserve deputy who lives nearby and knows John Reed said Reed expressed extreme anger just after the landslide and named a list of people who Reed blamed for the disaster. The former deputy, Bruce Cheek, said he couldn't remember the names Reed listed.

"Cheek stated Reed expressed in a serious tone that he was capable of killing people without any problems, he could shoot them and then 'they would never be able to locate the bodies as he [Reed] would get rid of them in the area of timber above the slide area," the affidavit said.

Reed allegedly made threats to FEMA workers about his displeasure over the federal response to the 2014 landslide, the affidavit says. He allegedly made a comment about "driving his truck through the building and taking everyone out with him." The sheriff's office took an informational report, but the complainant didn't pursue criminal charges, the affidavit said.

The county bought out Reed's house last month to ease any risks from future flooding, but investigators believe Reed had been returning to the home since then, the sheriff's office said. Court documents say the couple had complained to county officials that Reed was squatting at his old house, which prompted the county to warn Reed not to trespass.

In 2013, Shunn and Patenaude joined two other property owners in suing neighbors David and Shelly Dick over the use of the old logging road, which crosses their property. They alleged that the Dicks had been allowing people to trespass on their land to reach an unoccupied riverfront parcel owned by the Dicks.

Last month, the Dicks asked the court to dismiss the complaint.

John Reed's property was further along the logging road, and he too used it regularly, but the couple didn't want to sue him, Adams said. It's possible he had a right to use the road because of his historical practice of doing so, Adams said.

John Reed is a felon convicted on charges of drug violations and attempting to elude police, the affidavit said. He's also had several misdemeanor assault convictions.

Tony Reed has amassed dozens of arrests and twice was under state supervision - from 1989 to 1991 on drug charges, and from 1994 to 2003 for three misdemeanors, including an assault charge.