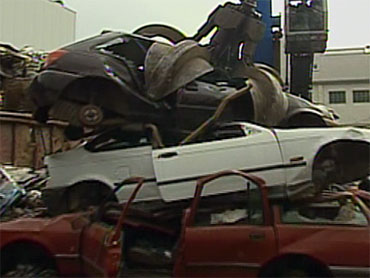 Thousands of cars aren't being crushed in Germany because they're worthless. What drove them to a junkyard outside Bonn is a bounty the German government is paying for old cars to keep the country's new car industry booming.

"For the whole economy it's very good," he said.

Since the government-funded plan began, new car sales have soared - up 40 percent last month, compared with March a year ago, though dealers point out the used car market has become a basket case.

"The second-hand car market overnight went down like the amount of money that the government pays you for the wrecked car," said Volkswagen salesman Arne Hildebrand.

The pattern is the same in almost a dozen European countries that have adopted similar schemes, which amount to an indirect government subsidy to the automakers, and theoretically benefit the environment as old cars are replaced by new greener models.

Right now it's rescuing the manufacturing business, but economists warn there is a hitch. The government incentive is creating demand the marketplace alone might not sustain. How will the carmakers do when the subsidy stops? In Germany, where one in five people work in the auto industry, they're willing to face that question later.