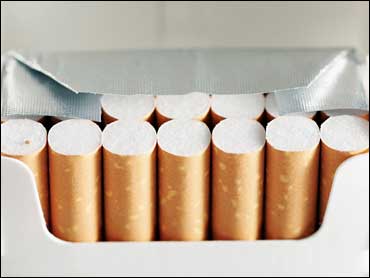 The Federal Trade Commission on Wednesday rescinded guidance it issued 42 years ago that has allowed tobacco companies to make claims about tar and nicotine levels based on testing by a machine.

The cigarette industry uses a test known as the Cambridge Filter Method to support any factual statements about tar and nicotine content in cigarette smoke. But the commission said the test method is flawed. It also said that the resulting marketing touting tar and nicotine levels could cause consumers to believe that lighter cigarettes were safer.

As a result, future advertising that lists tar levels for cigarettes won't be able to use terms such as "by FTC method."

"Our action today ensures that tobacco companies may not wrap their misleading tar and nicotine ratings in a cloak of government sponsorship," said Commissioner Jon Leibowitz. "Simply put, the FTC will not be a smoke screen for tobacco companies' shameful marketing practices."

The commission rescinded the guidance by a 4-0 vote.

The National Cancer Institute found that changes in cigarette design reduced the amount of tar and nicotine measured by smoking machines using the Cambridge Filter Method. However, there was no evidence those changes reduced disease for smokers. The machine doesn't take into account the way smokers adjust their behavior, such as taking more or deeper puffs to maintain nicotine levels.

"The most important aspect of this decision is that it says to consumers that tobacco industry claims relating to tar and nicotine are at best flawed and most likely misleading," said Matthew Myers, president of the Campaign for Tobacco Free Kids.

The commission said it originally believed in the 1960s that giving consumers uniform, standardized information about tar and nicotine yields of cigarettes would help them make informed decisions about cigarettes. At the time, most public health officials believed that reducing the amount of tar in a cigarette could reduce a smoker's risk of lung cancer. However, that premise is no longer valid.

Sen. Frank Lautenberg, D-N.J. introduced legislation this year that would prohibit companies from making claims based on data derived from the FTC's testing method, but the bill did not make it to the full chamber for a vote.

"Tobacco companies can no longer rely on the government to back up a flawed testing method that tricks smokers into thinking these cigarettes deliver less tar and nicotine," Lautenberg said.

One FTC commissioner, Pamela Jones Harbor, urged Congress to approve the regulation of tobacco by the Food and Drug Administration. The bill would authorize government scientists to track, analyze and regulate the components of cigarettes.

Tobacco companies have stated clearly over the years that there is no such thing as a safe cigarette. In a statement, Philip Morris USA, the nation's largest tobacco company, said it remains committed to working with the FTC and other federal authorities to identify and adopt testing that improves on the Cambridge method.

The FTC noted that all four major domestic cigarette makers told commissioners the 1966 guidance should be retained until a replacement test method was approved.

Philip Morris warned commissioners that elimination of the guidance could lead to a new "tar derby" in which cigarette makers would use different methods of measuring the yields in their cigarettes, thereby leading to greater consumer confusion.