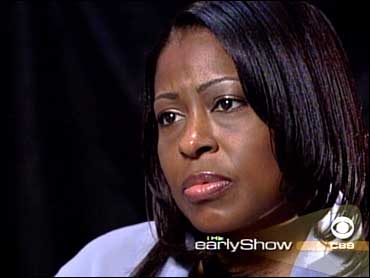 Every so often, a story comes along that reminds people of both the best and the worst that life has to offer. Such was the case of Cupcake Brown, whose was featured on The Early Show Tuesday.

Her life began with no hint of the pain that was to come.

"I had a mom and a dad and I lived in a wonderful neighborhood," she told Dave Price, "in a big Victorian style house. And I had my own bedroom. I had a white princess canopy bed."

Brown grew up in San Diego, in a loving and stable home. But everything changed when she was 11 years old and her mother died of a seizure. "Sometimes it hurts like it happened yesterday," she said.

To make matters worse, her step-father, Tim Long, who had raised Brown all her life, tried to get custody but lost when her biological father came to claim her.

"There was nothing I could do. She was taken away," Long said. "She was there and I could not get her back."

Her biological father put her into foster care, which, Brown says, was an utter nightmare.

Brown says she met a prostitute that night who showed her some kindness and a way to make some money. Within weeks of her mother's death, she says she was well on her way to a life on the streets.

In her new memoir, "A Piece of Cake," Brown writes that she hitchhiked up and down the coast of California, joined a gang at 14, and was shot at 15. At 17, she found her way back to her stepfather, all grown up and all strung out. To convince herself she wasn't really a hopeless junkie, she wanted to work.

"She wasn't the perfect image of a secretary from the way she dressed, but other than that, just being kind of a bit funky, no, I did not have any idea," he said.

Brown did good work for Rose but, within months, her addictions caught up with her job.

"She was absent a lot," said Rose, "and I really felt I might have to terminate her employment."

It was when she saw her reflection in a window one day, after a four-day crack binge, that Brown knew this life was over.

"For the first time I really, really saw myself," she told Price. "My eyes were sunken in my face. My lips were scabbed and burnt from the crack pipe … and I knew then that I was dying. And it was then that I realized that I didn't want to die like that. And that was the beginning of the beginning."

With Rose's support, she kept her job and went into rehab, where she met a sponsor who inspired her to reach for more.

Brown spent the next 11½ years in college and then law school, graduating in the top 10 percent of her class.

"I think everybody was shocked, including me, when I ended up in the top 10 percent. At the same time, I worked my butt off for that," she said.

"What impressed me at the time was her extraordinary good cheer, enthusiasm, energy," Balabanian said. "I was completely unaware of her background and what she had been through prior to getting to law school."

At 41, and now a fifth year associate at one of the nation's top law firms, Cupcake Brown is taking inventory of her life and considers what her mother would say if she could see her now.

"I think she would say what I think God says, 'Well done, my child.' "

Brown is taking four months off for a book tour and a vacation, her first in more than a decade, and then she intends to return to her work as an attorney.

To read an excerpt from Brown's memoir, "A Piece of Cake," click here.