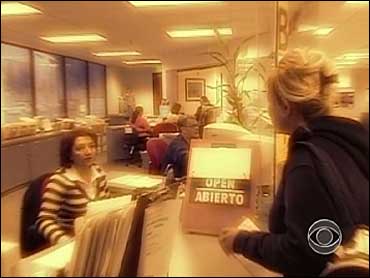 Since the recession began at the end of 2007, jobs in this country have been vanishing at an alarming rate - more than 11,000 a day.

More than 13 million Americans are now officially unemployed, and as CBS News correspondent Sandra Hughes reports, that's putting some in an unfamiliar and difficult position: turning to the government for help.

Andrew Balzer never thought he would be standing in line for food stamps.

After working in the corporate world as a staff recruiter, he was laid off in November. He had a six-figure income. Now he has a case worker.

"The household income is just unemployment: $950 every two weeks," he told the case worker recently.

That's the limit for unemployment: $1,900 a month to support his wife Michelle, and daughters Brandi, Bailey, Shasta and Skylar.

He's already six months behind on his $3,100 mortgage, and one of his two cars has been repossessed.

The family is hopeful they'll get the full $800 a month offered through the food stamp program.

It's hard to get help, being in the middle class. It really is," Michelle Balzer said.

Throughout Los Angeles, public assistance offices are overflowing with the newly needy. In one suburban location, there are now more than 3,000 requests for help every month. That's a 20 percent increase over this time last year.

"These are mostly people who are really hard working people. They don't want to depend on the system but don't have a choice," said welfare worker Tina Kolgian. "They want to survive."

While applications are up, so are rejections. The county denied more than 18,000 food stamp applications in February, up 14 percent from a year ago. Current rules make qualifying for help almost impossible if you own a car or have a small amount of savings. There are calls to loosen those rules temporarily.

"We're looking at corporations, banks, insurance companies that have gotten a bailout that have been doing very well," said L.A. County Supervisor Gloria Molina. "What were saying here - let's help the middle class. They need a bailout right now."

After four trips, fingerprinting, hours of interviews, and mountains of paperwork, Balzer got a food stamp card, but only for $393 a month.

"It's very nice to have. It definitely would help," he said.

Meanwhile he's home working at the hardest job he's ever had - finding one.