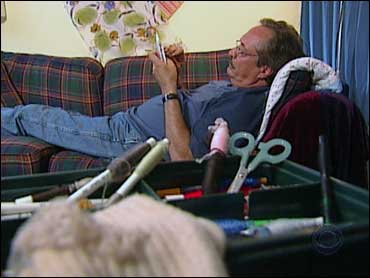 You've got to be comfortable with your manhood to admit what 53-year-old Ray Materson of Troy, N.Y., is about to tell you — that after finishing all of his macho weekend chores, this divorced father of three loves nothing more than to be able to go inside, settle into the couch, and embroider.

"It doesn't get any better than that," Materson told CBS News correspondent Steve Hartman for this week's Assignment America. "I never get bored with it."

He's been doing it for 20 years. And if you think he looks like an unlikely embroiderer now, consider what he looked like when he got started.

Materson is a former inmate at the Connecticut State Penitentiary. He spent nearly eight years behind bars for robbery — he says to feed his coke habit.

"When you're a practicing addict, you can justify just about anything you do," Materson said.

In prison, to pass the time, one day he took some thread from a sock, borrowed a needle from the guard, made a hoop out of a Rubbermaid container and ripped up a pair of boxers to embroider onto.

Did he get teased?

"I did get teased," he said. "A guy doesn't say to you in the holding take, 'When you get to the joint, you get yourself an embroidery hoop to earn their respect.'"

Undaunted, he kept at it day and night and still continues — now, 13 years after his release. His work is highly prized and it's on display now at a gallery at UC-Davis near Sacramento.

Each piece is about the size of a credit card, and although not exactly grandma-friendly, you can't help but appreciate the talent and detail.

In prison you could buy one of his pieces for a carton of cigarettes. Now they go for up to $4,000. It easily pays the rent. But he says it has never been about money.

What is it all about?

"Skills with how to deal with life, like gaining patience; like being able to start a project and finish it, which is really important in the real world," Materson said.

That's why Materson is trying to start embroidery programs in prisons across the country. To raise money for launching the idea, he plans to sell his latest masterpiece — a one-of-a-kind work of art that he hopes will go for more than any other piece he's ever done.

To take a look at this piece and see Katie Couric's reaction to it, watch the full video.