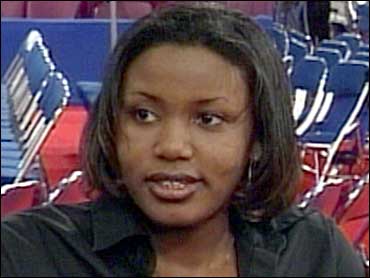 "People have tried to call us Generation X," Princella Smith said at the Republican Convention Tuesday night. "I call on us to become Generation X-ample."

The 20-year-old from Wynne, Ark., earned the opportunity to address the delegates with the winning essay she submitted to the 'MTV Stand up and Holla' contest.

Excitement, not nervousness, is what she tells The Early Show co-anchor Harry Smith that she felt as she delivered her speech. "I was just ready to give this message. I was pumped up. I'm an athlete, so I feed off the cheers of crowds."

MTV and the convention sponsored the contest as part of the "Choose or Lose" campaign to encourage young people to vote. Her message?

"I just call on every generation, not only my own generation, to be an example to the world and that was in reference to community service, to getting out and voting, to supporting our troops, and most of all, rallying behind President Bush," she explains.

Princella Smith has been recognized for her involvement in community programs to help young people and for teaching black history programs to those in her community.

But speaking at the convention has been for her "the most invigorating experience I've ever had in my short life."

Princella Smith beat out nearly 1,000 applicants in the MTV essay competition. The daughter of a minister and a teacher, she is a junior
majoring in history and political science at Ouachita Baptist
University in Arkadelphia.

Princella Smith expects to graduate in 2006 - a campaign year for congressional and state offices - then spend some time on the campaign trail before she heads to law school.

The goal of teaming with MTV for the essay contest was to get more young people involved in the political process. Contest entrants were between 18 and 24 years old. Republicans want to appeal to young voters with their convention program, but according to polls, Bush trails Kerry among young adults.

Both the Kerry daughters and the Bush daughters were at the MTV Video Music Awards over the weekend, getting the oddest reception.

MTV News correspondent Gideon Yago was there. "It was just a loud roar inside of a stadium. You couldn't really tell what was booing and what was cheering," he tells Harry Smith. "Since then, people are trying to analyze why it is that people spoke up and booed. But I think the bottom line is that you had a really strong reaction and that is because, as we think, young people care so much about this election. It shows us a little bit how divided this country is and how young people actually care about it."

"We see from all of the polls we have returning that almost 20 percent more than any election in history, young people said they're likely to vote. It's up in the 60th pecentile. If we can make that happen and get that many kids to the election polls in November, we will far exceed our numbers."

However, it is not clear whom they're going to vote for. Yago says, "One of the clear things about working with the RNC and the DNC, we see young voters base their vote on issues. They don't traditionally identify themselves as Democrats or Republicans. I think there is a lot of ground to pick up on the swing vote, on the swing voters."