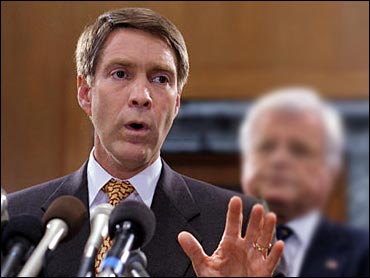 It took Republicans little time to anoint Bill Frist as Senate majority leader after Trent Lott's historic resignation over his apparent nostalgia for segregation, and not long for critics to launch a detailed look at Frist's own history with race.

While Frist seems a shoo-in - none of the 51 GOP senators challenged him after Lott's resignation Friday - the Tennessee heart surgeon faced questions about allegations of minority intimidation during this year's Senate races and his former membership in a white-only country club.

Senate Republicans didn't seem too concerned, rushing to endorse their affable colleague. They planned a conference call Monday to tally votes - although interviews by The Associated Press Friday showed Frist has more than the 26 votes he needs when the GOP takes over the Senate Jan. 7.

The party wants to repair its relations with America's minorities and move on to this year's congressional agenda.

But Democrats said letting Lott go would not end the discussion on race started by the Mississippian at the 100th birthday party for South Carolina Sen. Strom Thurmond on Dec. 5. Lott said Americans would have been better served had Thurmond won his 1948 segregationist campaign for president.

"Sen. Lott's remarks represent a symptom of a much larger problem his resignation does not solve," Sen. Hillary Rodham Clinton, D-N.Y., said in a statement.

Rep. John Conyers of Michigan, top Democrat on the House Judiciary Committee, called Friday for a Justice Department investigation of allegations that the National Republican Senatorial Committee - run by Frist - was behind the intimidation of minority voters during this year's election.

The nonpartisan Center for Public Integrity pointed out that Frist, 50, was a member of the then all-white Belle Meade Country Club in Nashville, Tenn., before entering public life. He resigned from the club before running for Senate in 1994, saying he left because of the impression it left with voters.

The Humane Society raised Frist's shamefaced confession in a 1989 book to adopting cats as a medical student, and then experimenting on them. "We hope that the drive behind that pattern of behavior has been fully purged," said Wayne Pacelle, the Humane Society's senior vice president.

Frist, known to be close to President Bush, would offer the GOP a fresh face who often comes across in a reassuring manner.

When an anthrax-laden letter surfaced in the office of Senate Democratic leader Tom Daschle's office a year ago, Frist - who periodically performs medical procedures in hospitals in the United States and Africa - led an effort to calm his colleagues and worried Americans.

He also has been a leading Republican on health care issues, and many Republicans say they believe he may consider a presidential run in 2008.

Frist said nothing about his candidacy for the Senate leadership Friday after being approached by several senators asking him to seek the job, only praising Lott for making "the selfless decision."

Leadership elections are notoriously unpredictable affairs in which promised votes fail to materialize and lawmakers' decisions are based on personal relationships, past conflicts and any number of unpredictable factors.

But most of Frist's Republican colleagues praised him and said the eight-year Senate veteran and millionaire heart surgeon would be good for the party.

"I am confident he will lead the Republican Party to accomplish important priorities for the American people," said Sen. Rick Santorum, R-Pa., who was considered a potential rival of Frist.

Lott, a 30-year congressional veteran who as late as Thursday vowed to fight on for his leadership post, bowed out with a terse written statement that he was doing so "in the interest of pursuing the best possible agenda for the future of our country." He said he'd continue to serve in the Senate.

CBS News correspondent Bob Schieffer reports Lott's friends told Schieffer that Lott thought he could survive until Thursday night, when Frist, the White House favorite, said publicly that he would challenge Lott. It was then, Lott told his friends, that he finally saw the handwriting on the wall, Schieffer says.

White House officials contend they were neutral in the affair, Schieffer adds, but Lott told his friends he believed the White House orchestrated the attacks against him, to help Frist.