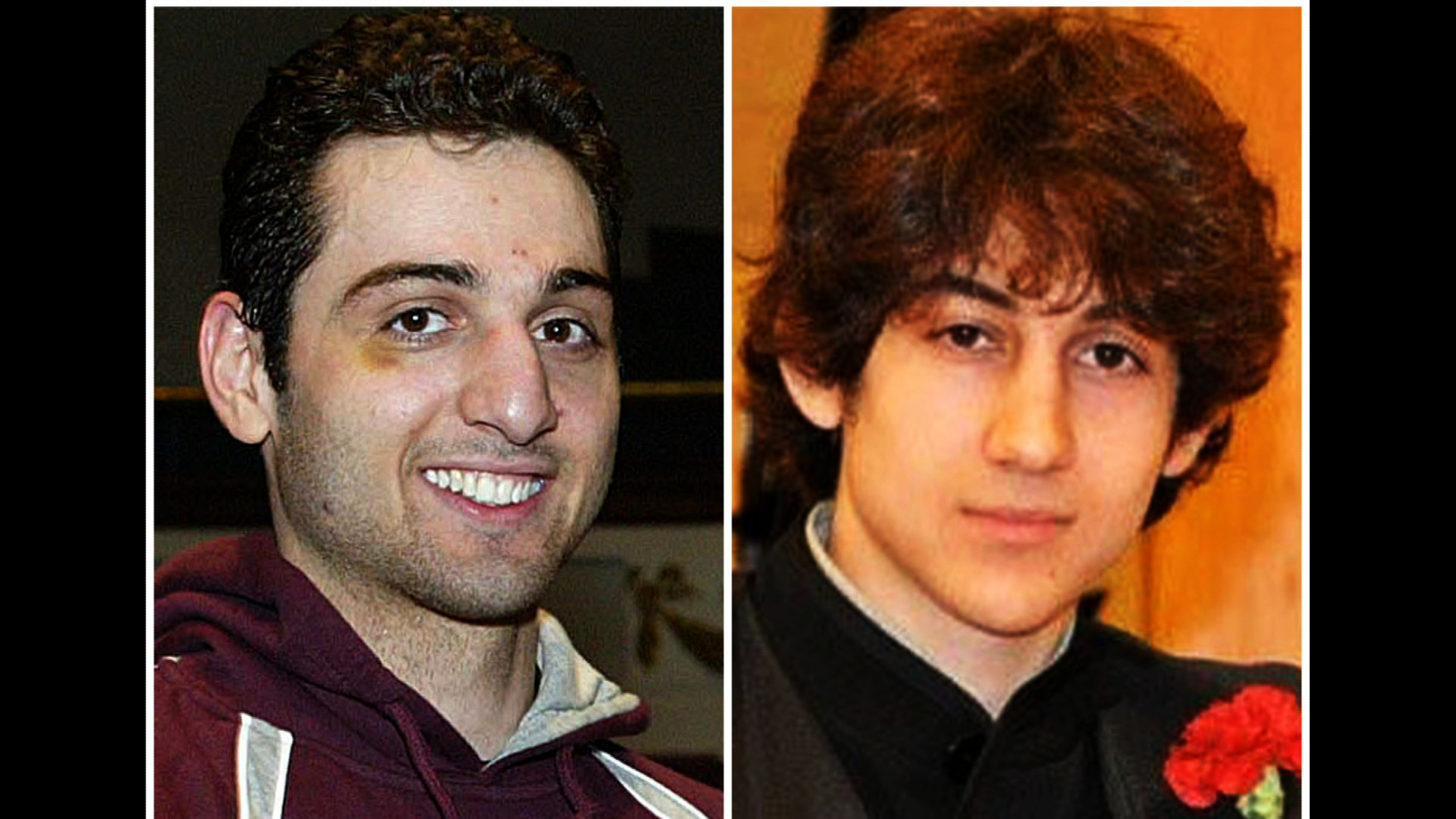 Interviews with friends and family of Tamerlan and Dzhokhar Tsarnaev paint two very different pictures of the brothers suspected to be behind Monday's Boston Marathon bombings.

Friends of Dzhokhar Tsarnaev, the 19-year-old suspect still on the run, describe a young "Americanized" man nicknamed Jahar, who dressed in shorts and t-shirts and played sports such as soccer and basketball.

He was also an active wrestler, and was named a Greater Boston League Winter All-Star for wrestling in 2011.

In high school, he worked as a lifeguard at Harvard, according to the Harvard Crimson. Dzokhar attended Cambridge Rindge and Latin School, the same high school as Ben Affleck and Matt Damon.

In 2011, he was selected by the city of Cambridge as one of 45 recipients of a $2,500 scholarship. Friends at Cambridge Rindge and Latin School describe Dzokhar as friendly and nice-going.

"He was the class clown. He would just joke around, try and make jokes, get on the teachers nerves, just like a typical class clown," said a young woman who was a classmate of Dzokhar, to CBS affiliate WBZ. "He was very friendly. Everyone liked him. No one had any problems with him."

Larry Aaronson, a teacher who knew him at his high school, was shocked when he saw the FBI tape.

"I said, 'that looks like Dzhokhar,' and people have said to me, 'why didn't you call people and say you could identify this person?' -- Because there is no way this could be this kid! There is no way in the world. There's nothing about him that would suggest anything like this, politics, religion, nothing."

Dzokhar appears to have had a profile on VK, the Russian equivalent of Facebook, with 499 followers, or "friends".

After graduating from Cambridge Rindge and Latin School, Dzokhar enrolled as a student at the University of Massachusetts Dartmouth.

There, friends describe him as a "cool and funny kid", who didn't talk much about home, although his classmates knew he was from Chechnya.

Dzokhar didn't talk about religion either, but Francis Barry, whose roommate was good friend's with Dzokhar, told CBS News that Dzokhar said his older brother didn't like the fact that he smoked weed, because his older brother was very religious.

Barry also described Dzokhar as a "real chill, down-to-earth" kid and said he was "totally surprised" to learn he was involved.

However, Barry said that the last time he had seen Dzokhar was in February. After February, Barry said, Jahar kind of dropped off the map. Even people who knew him well said they hadn't seen or heard from him.

Michael Derby, who knew Dzokhar during his freshman year, told CBSNews.com, "We mostly played x-box, watched TV, stuff like that. He was a really quiet kid, but when he was talkative he was really funny."

"From what I saw, he was always smiling and laughing. He mentioned his brother was Muslim ... he only brought up his brother once in a while," said Derby.

"When I saw the photo I was with some friends and we all said it resembled Jahar," said Derby. "I was shocked. He was really a normal kid...nothing I ever saw made me think that he would do anything like this; he was not angry, not overly political," said Derby.

According to Russia Today, the family moved to Dagestan from Kyrgyzstan in 2001.

It seems the Tsarnaev family came to the United States anytime between 2002 to 2004.

A law enforcement source said that Dzhokhar Tsarnaev, became an American citizen on September 11, 2012. The source said he came to the United States on a tourist visa April, 2002, seeking asylum in September of that year and gaining lawful resident status in Febuary of 2007.

There is no confirmation on whether Tamerlan Tsarnaev had also become a U.S. citizen. It seems there may have been more hints however, that the older brother was becoming radicalized.

Tamerlan was apparently an active amateur boxer. In a 2010 Boston University magazine photo profile of Tamerlan, entitled Will Box for Passport, An Olympic Drive to Become a United States Citizen, a caption under one of the photo's says, 'Though he's lived in the U.S. for five years, Tsarnaev says, "I don't have a single American friend. "

He is described as a boxer from Chechnya who trains at the Wai Kru Mixed Martial Arts Center in Boston, Massachusetts, entering in the national Golden Gloves competitions in hopes he might be selected for the next U.S. Olympic team and become a naturalized American.

The photo essay adds that Tsarnaev, who studied at Bunker Hill Community College in Boston and wanted to become an engineer, took the semester off to train for the competition.

Another caption says that, "In the absence of an independent Chechnya, Tsarnaev says he would rather compete for the U.S. than for Russia."

"I'm dressed European style," Tsarnaev told the photographer, and added he loves the movie Borat, even though "some of the jokes are a bit much".

One caption said, Tsarnaev doesn't generally remove his shirt when among women at the gym. Tsarnaev, a Muslim, doesn't drink or smoke. "God said no alcohol," he says.

"He was confident, he kind of had an air about him," said Julian Pollard, a boxing teammate of Tamerlan.

He started to notice something different about Tamerlan between 2009 and 2011. Tamerlan became detached and seemed to delve deeper into his Muslim faith, said Pollard.

"The first year I met him, he had on like, leather pants and snake skin boots. The second year when I saw him he had on a t-shirt, hoodie and jeans. You know it was about boxing, his faith and what was going on in his life. He felt good about his change," said Pollard.

A friend of the couple, who spoke to CBSNews.com on the condition of anonymity, said that when she first met Tamerlan in 2007, he was outgoing, and liked to go out to clubs and drink alcohol.

He started dating her roommate, Catherine Russell, at Suffolk College, and with his friends, would come over to their dorms to take them out, dressed in designer clothes.

But, sometime around 2008 or 2009, Tamerlan became more religious, lecturing his girlfriend, and her friends, about drinking and having sex.

She added that Tamerlan became violent with Russell; he was arrested for assaulting her in 2009.

"He became very violent with her and was brainwashing her into converting into Muslim," she said.

Soon after this, she says her friends and her lost touch with Tamerlan and Catherine Russell, who by now was wearing a hijab.

Russell got pregnant with Tamerlan's child, and they married shortly after, none of their old friends attended the wedding.

Tamerlan appears to have had a YouTube account that included playlists called "Terrorists" and "Islam", which he created five months ago.

Two months ago, he subscribed to a YouTube channel called "Allah is the One".

In the Boston University photo essay, Tamerlan is asked why he does not have any American friends.

"I don't understand them," he replied.