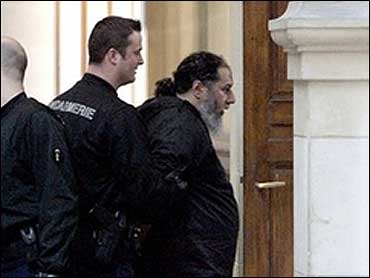 Boubakeur el Hakim traded his Paris neighborhood of boulangeries and halal butcher shops for the insurgent camps of Iraq. When he came home, he told his war stories to other young men on the forgotten edges of French society, allegedly persuading some to follow in his footsteps.

His younger brother did, and died fighting U.S. forces.

After years of investigation by French authorities, el Hakim, 24, went on trial this month in a case exposing how the Iraq war has sucked radical youths from Europe to a battlefield where they have learned skills that officials fear may one day be used in domestic terror attacks.

Along with four other young Frenchmen, a Moroccan and an Algerian, el Hakim is accused of funneling French Muslim fighters to Iraq. All the Frenchmen except suspected ringleader Farid Benyettou, 26, have acknowledged going to Iraq or planning to go. All deny inciting others to go.

All seven men are accused of criminal association with a terrorist enterprise, a vague charge that carries a maximum 10-year sentence, though the prosecutor only asked for between three and eight years.

The case is a delicate one in France, which strongly opposed the U.S.-led campaign in Iraq but has long struggled against homegrown terrorism. It also highlights a dilemma in many European nations with growing Muslim populations: Cracking down hard risks alienating or radicalizing moderate Muslims and betraying western ideals of tolerance.

The suspected nucleus of the network, janitor-turned-street preacher Benyettou, told the court the case against him was "fantasy" and an affront to his freedom of speech. He told the judge he had served only as a friendly ear to young people in his neighborhood, answering questions about Islam that went ignored by France's secular schools and institutions.

In one interrogation session with anti-terrorist agents, however, Benyettou said: "I taught that suicide attacks are legitimate under Islam."

"Jihad is justified," he said in another session in the days following his January 2005 arrest, according to the depositions viewed by The Associated Press.

El Hakim described placing and detonating roadside bombs with equipment that resembled a cordless phone, the transcript of one deposition says. He claimed 10 American troops were killed in the last three operations he took part in, it says.

In a French radio interview broadcast from Baghdad in 2003, he urged Parisian friends to join him on the battlefields. "I'm ready to set off dynamite and boom! Boom! We kill all the Americans!" he said on RTL radio.

In court, while he didn't deny his radio appeal, el Hakim said some of his statements to police were made under duress and that his role in Iraq was primarily "humanitarian."

Investigators say the alleged network funneled about a dozen French fighters to camps linked to al Qaeda in Iraq head Abu Musab al-Zarqawi, and sought to send more before he was killed in a U.S. air strike in 2006. At least seven French insurgents have died, some in suicide bombings, police say.

The classified case file could fill a suitcase. It includes transcripts of taped phone conversations; suspects' family trees; extremist Islamic sermons; excerpts from a Web site explaining how to use Kalashnikov rifles; and grainy images of dozens of people questioned in the case.

Since the group was dismantled in 2005, young French Muslims wanting to fight abroad have largely steered clear of such organized cells, according to a senior French police official not authorized to be named publicly because of agency policy. Instead, youths are heading to war zones individually, to better avoid detection.

The key concern for French police is not where the fighters go but what they do when they come back to France, home to Europe's largest Muslim population, nearly 10 percent of its 62 million people.

There has been no mention in the Paris trial of any plan to attack French sites, but officials say they remain worried about the possibility - and that fear bolsters the prosecutor's case.

The so-called 19th arrondissement network is named for the Paris district where it was based, a multi-national neighborhood where families with roots in one-time French colonies in North Africa crowd into housing projects that rise above street markets offering Moroccan melons and pungent French cheese.

Frustration among youth of immigrant backgrounds over discrimination and bleak job prospects helped fuel riots in suburban housing projects around France in 2005. That same frustration, defense lawyer Dominique Many said, pushes some toward Islamic extremism.

Benyettou practiced a strict Salafist interpretation of Islam, and enjoyed credibility among radicals because his brother-in-law was a convicted member of an Algerian insurgency movement.

Benyettou exhibited little charisma during the trial, his gaunt frame hunched on the bench, occasionally brushing back his chest-length hair or nudging up his oversized glasses.

But back in the 19th arrondissement, he persuaded - by his own admission to investigators - about 10 young people to leave France for Iraq. In court, he acknowledged he had had "a role" in helping fighters who wanted to go to Iraq, but said there was no organized network.

"I really believed in the idea," said one of his students, defendant Cherif Kouachi, 25. He said he was motivated by his outrage at television images of torture of Iraqi inmates at the U.S. prison at Abu Ghraib.

Another alleged member of the group, Peter Cherif, was arrested by U.S. authorities and his mother says he was held in Abu Ghraib. He faces a separate trial in France.

Another, 25-year-old Mohammed El Ayouni, who lost an arm and an eye in 2004 in a U.S. tank shelling near Fallujah, described administering IVs and shots to injured fighters and keeping watch for American troops. He said Iraqi families welcomed the French fighters, preparing their meals and laundering their clothes.

The fighters said they traveled through Syria first, taking Arabic lessons and getting basic weapons training.

When Boubakeur's brother Redouane el Hakim was killed in July 2004 - found in an insurgent hideout in Fallujah bombarded by U.S. forces - his mother organized a memorial celebration of her son's martyrdom, according to court documents and two defense lawyers on the case.

It was American authorities who first confirmed the presence of French citizens among Iraqi insurgents, judicial documents show.

Other European countries have also fed fighters to Iraq.

Two men considered linked to Europe's deadliest Islamic terror attack, the 2004 bombings in Madrid, are believed to have later killed themselves in suicide attacks in Iraq. Spanish authorities have arrested dozens of people suspected of recruiting Islamic fighters for the Iraq insurgency.