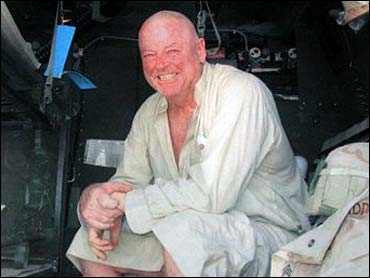 An Australian engineer who was dramatically rescued in Baghdad last week after being held hostage for six weeks arrived back in his home country early Monday saying he feared his captors would murder him.

But at his first media conference since being freed, Douglas Wood said he never gave up hope during his 47-day ordeal that his family would keep trying to free him.

"I love my family, and I knew that they would be doing everything they could," said Wood, his American wife Yvonne Given and his brothers Vernon and Malcolm and their wives by his side during a press conference at Melbourne Airport.

Iraqi and U.S. troops freed Wood, a 64-year-old resident of the U.S. state of California, early on July 15 from a Baghdad house where insurgents were holding him for ransom.

Wood said he was still considering whether to return to Iraq, where he had been working for about a year before he was kidnapped, and added that he still supports U.S. and Australian policies in Iraq - particularly efforts to train Iraqi security forces.

"I actually believe I am proof positive that the current policies of training the Iraqi army ... worked because it was the Iraqis that got me out," Wood said.

Australia sent a specialist hostage negotiation team with elite troops to Iraq to try to secure his freedom after he was abducted on April 30. The government refused the kidnappers' demands for Australia to withdraw its 1,400 troops from Iraq and pay a reported 25 million Australian dollars ($19 million in U.S. funds) ransom.

Wood described his treatment at the hands of the kidnappers - who at one stage kicked him in the head and shaved off all his hair - as "a bit intimidating." He said he sometimes feared they would kill him.

Asked if he was feeling fragile after his ordeal, he said: "Not especially. I've got some physical ailments and I've been deprived of medication for a bit."

Wood suffers a heart condition but his captors gave him medication apparently passed to them by a senior Australian Islamic cleric who was working to secure his release.

But he was clearly elated at being back home. As he entered the press conference, Wood yelled, "Waltzing Matilda" - the title of Australia's unofficial national song.

Wood was freed by Iraqi and U.S. troops during a search of a house in Ghazaliya, one of the most dangerous Sunni Arab neighborhoods of Baghdad.

Sheik Taj El Din al-Hilaly, an Egyptian-born Sunni cleric who flew from his Sydney home shortly after the abduction to negotiate Wood's release, said Sunday the hostage was to have been freed later that day anyway.

"This place was similar to a transit place for the final delivery which was planned to happen on the same day at 6 p.m.," al-Hilaly, Australia's mufti since 1989, told Australian Broadcasting Corp. television in Cairo.

The mufti, who has been praised by the Australian government for his efforts to secure Wood's freedom, said the kidnappers had agreed to hand over their hostage without payment of a ransom.

Defense Minister Robert Hill said he had no information to support the mufti's claims.

Wood said he did not know who the insurgents were who kidnapped him.