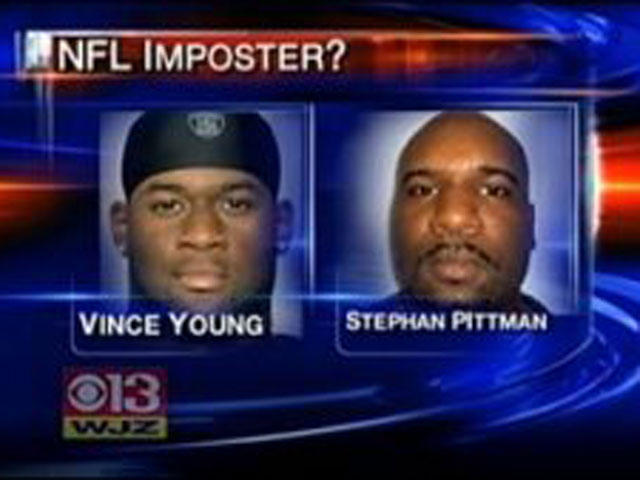 Stephan Antwain Pittman was arrested Friday at a shopping center in Temple Hills, Md. on a charge of first-degree fraud.

Police say Pittman, pretending to be Young, tricked a woman into giving him $2,500 for a foundation that he said benefits children. The two had met on Facebook over the summer.

The two began meeting in person, and Pittman told the 28-year-old that he was the Philadelphia Eagles backup quarterback, The Washington Post reports. Julie Parker, spokeswoman for Prince George's County, said Pittman was convincing. "He's 6-foot-5, 230 pounds, so he's got that look," she said. "And apparently he's got a swagger about him. . . . He was charming, well spoken."

Parker says, The Post reports, that the woman grew suspicious when asked for a donation but that she "began to feel intimidated and just gave him the money."

According to CBS affiliate WJZ, Parker says Pittman, "said that he needed money to help D.C.-area children to buy things like hula hoops, and bikes. So he convinced her to give him a fair amount of money."

The investigation, which is ongoing, was reportedly sparked by Young's agent, who discovered the imposter had showed up to charity events for children posing as the player.

Through a spokeswoman, WJZ reports, Vince Young says he is "thrilled by the arrest."