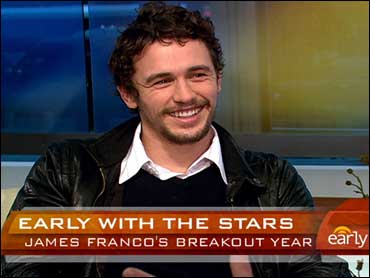 Actor James Franco is having a breakout year.

This summer he played a stoner in "Pineapple Express" and now he is receiving Oscar buzz for his role as Scott Smith, Harvey Milk's lover and confidante, in the new movie "Milk."

Milk was the first openly-gay man elected to an important public office in the United States and was subsequently assassinated.

"Harvey Milk had to run four times before he was elected to office. My character helped him with his early campaigns, not knowing anything about politics, and they moved out to San Francisco together," Franco told Early Show co-anchor Harry Smith.

"I think that's one of the good things about this movie. It's kind of like a biopic, but not really. It doesn't feel like that to me. And one of the ways they just got around that is he makes it a very personal story and you really get to see that the private life of Harvey Milk," Franco said.

Some might assume that Penn, who made a serious commitment to his role, would be intimidating on the set. Franco said that couldn't have been further from the truth.

"We had rehearsals and stuff like that, as far as the scenes go. You know, he's Sean. Everybody that shows up on the set is thinking 'I just don't want to screw up with Sean Penn.' And he's a guy with such a stature that he could easily intimidate everybody on set. But he was the complete opposite and was very welcoming and just encouraging and really brought everyone together," he said.

Franco can not solely be defined by his roles in "Spiderman" and "Pineapple Express" now. In "Milk," he delivers a completely different performance.

"There is a part of you that's got to be like 'This means I get a career. I'm not just the pretty face on the Gucci ads, I get a career,'" Smith said.

"No -- it was an incredible opportunity. I actually pursued it. I heard Gus (Van Sant) was doing it. I was in London studying. I wrote him an e-mail and told him I'd do anything to be a part of this movie and also because it's such an important movie, but he's been one of my favorite directors since I started," Franco said. "It was truly a dream to work with both of those guys."

"I thought my classes were early. This is pretty early," Franco said about his Early Show appearance. "I'm in the film program. We had to work on documentaries. So I just did a documentary on the behind-the-scenes of 'SNL.' And I know for 'Biography,' you did the same."