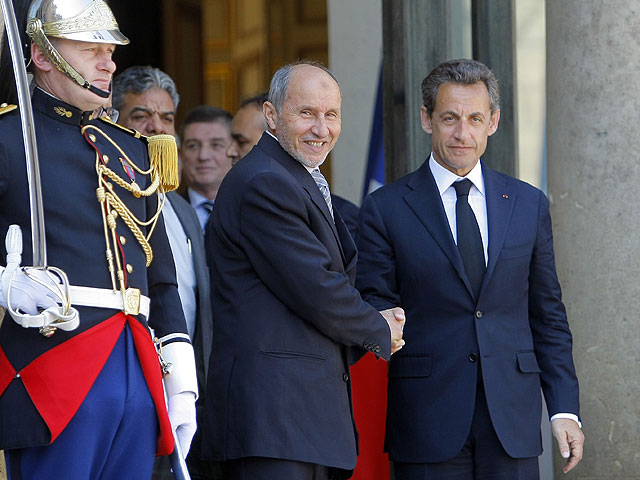 PARIS - France vowed Wednesday to step up airstrikes on Libyan leader Muammar Qaddafi's forces and acknowledged that it has military officers already working with Libyan rebels on the ground.

France and Italy joined Britain in announcing their commitment of military officers to help the rebels, who have failed to rout Moammar Qaddafi's forces despite weeks of NATO-led airstrikes.

Both France and Italy remained firm against sending ground troops into Libya, a dangerous and politically risky step. However NATO, which is leading the U.N.-sanctioned international military operation to protect civilians, is now acknowledging that airstrikes alone cannot stop the heavy shelling of cities by Qaddafi's forces.

Qaddafi's forces attacked a mountain town and a besieged coastal city Wednesday, part of a drive to crush pockets of resistance in the western part of the country that is largely under the Libyan leader's control.

The officers are working on technical, logistical, and organizational help, she said. She did not indicate how long they have been there.

"We will help you," Sarkozy promised his Libyan visitor. He gave no details.

A NATO official said there has been no pressure from France to increase allied strikes, but that France might increase its own contribution. The official was not authorized to be publicly named.

Britain said Tuesday it was sending up to 20 military advisers to help Libya's rebel forces. The military personnel, including officers with logistical and intelligence expertise, will work with the National Transitional Council, the political wing of the rebel movement.

While France helped lead the push for international intervention in Libya, it appeared wary of lobbying for a ground campaign.

"We do not envisage deploying ground troops in any way," Baroin said.

French Defense Minister Gerard Longuet said the U.N. Security Council should weigh whether to send ground troops. "It's a real question that merits international reflection," he said after a Cabinet meeting Wednesday.

But Baroin said France would not request another U.N. resolution on the subject.

Abdel-Jalil insisted that the ragtag Libyan rebel force and fledgling opposition governing council would respect international norms if they emerge victorious in the battle with Qaddafi.

"We promise to the international community that we will work to build a democratic state where the chief of state arrives in power not on a tank, but by a ballot box," he said. "We are also committed to working to fight terrorism and stop illegal immigration."

Tensions over waves of illegal migrants from North Africa entering Europe in recent weeks have strained relations among European neighbors and clouded the international campaign in Libya.

NATO's top military commander, U.S. Navy Adm. James Stavridis was in Prague for talks with Foreign Minister Karel Schwarzenberg on Wednesday and Defense Minister Alexandr Vondra on Thursday. Stavridis' visit comes as NATO is seeking to get military contributions from member states that have not participated in the campaign in Libya.

The Czech government has said earlier it was not planning to contribute troops for the NATO mission in Libya, partly because it has not been asked to do so.

Meanwhile, the mountain town of Yifran came under heavy shelling, and firefights erupted in city of Misrata, besieged by Qaddafi's troops for nearly two months.

Fighting in Libya erupted two months ago, when protests against Qaddafi's four decades in power turned into an armed uprising. Rebels now control most of the east, while Qaddafi holds most of the west. However, there are rebel-held areas in western Libya, particularly the Nafusa mountain area that is home to Libya's Berber minority.

Since the weekend, the Nafusa region town of Yifran, with a population of about 25,000 people, has come under daily attack with Grad rockets, tank shells and anti-aircraft guns, said a rebel fighter, who would only give his first name, Belgassem, for fear of reprisals.

The shelling has sent thousands fleeing into nearby Tunisia. Four mortar shells from the fighting landed on Tunisian territory on Monday, Tunisian officials said late Tuesday.

The rebel fighter said the assault damaged a water tank as well as homes in Yifran. Doctors had to abandon the town's hospital because of the shelling, said Belgassem, speaking by phone from the nearby town of Qalaa.

Qalaa has also come under attack, but there was no shelling Wednesday, Belgassem said. "We are defending our city and they can't get into the center because we are here," he said.

In Nalut, another mountain town near the Tunisian border, rebels fought off Qaddafi loyalists on Monday and pursued them for about 30 kilometers (18 miles), said Ayman, a rebel fighter from Nalut. In clashes Tuesday, the rebels seized weapons and ammunition from Qaddafi's forces, said Ayman, who would not give his last name for fear of repercussions.

He said four rebels were killed in two days of fighting.

International aid officials said more than 10,000 people from the Nafusa mountain area have fled to Tunisia in recent days, avoiding official border crossings manned by Qaddafi loyalists. The refugees stay in camps near the Tunisian border towns of Dehiba and Remada, or are being hosted by Tunisian families.

Firas Kayal, an official with the U.N. refugee agency, said the Libyan border area "has apparently been under heavy fighting and shelling between opposition forces and Qaddafi."

The refugees "enter in the cars, through the mountains, cars filled with luggage and families and women and children and personal items," he said.

Yifran, Qalaa, Nalut and others near the Tunisian borders are inhibited by Berbers who suffered under Qaddafi repressive policies. Qaddafi has dubbed Berbers as 'product of colonialism' created by the west to divide Libya. In the 1970s, members of pan-Berber associations were arrested and Berber activities were banned.

In the other rebel outpost in western Libya, the besieged city of Misrata, new clashes erupted Wednesday.

Exchanges of fire were heard Wednesday between Libyan troops and armed residents in the city center. NATO planes flew overhead, but did not carry out airstrikes.

The rebels control the port area, while Qaddafi's forces have deployed along Tripoli Street, a downtown thoroughfare. Misrata has been under siege for nearly two months, and human rights groups have warned to situation there is increasingly dire. Hundreds of migrant workers and wounded people have been evacuated by boats, which have also delivered humanitarian supplies, including food and medicine.