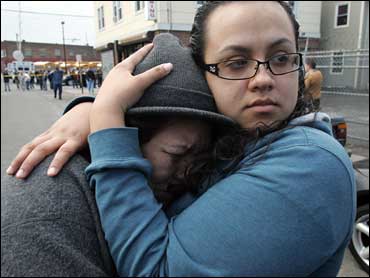 The Nassau County Fire Marshal's Office ruled out natural and accidental causes in the fire in the Long Island village of Lawrence, county police said. No arrests have been made.

The fire marshal's office didn't immediately return a telephone call Thursday evening, and police could not say how fire investigators reached their conclusion.

The building held a coin-operated laundry and two second-floor apartments. Authorities said the blaze may have started in the stairway to the second floor. They were investigating whether the building was required to have a fire escape, which it did not.

The 42-year-old father, a 12-year-old boy and the 9-year-old girl's twin brother survived by jumping out the windows, along with a tenant in their apartment and four people in the other apartment.

The blaze was so fierce that it damaged an adjoining building, displacing about 20 people.

Mike Deery, a spokesman for the town of Hempstead, which includes Lawrence, said officials issued a summons Thursday citing the building's owner with failing to obtain a permit to remove a fire escape previously attached to the structure; it was unclear when the fire escape was removed. He said town officials were still investigating whether a fire escape was required.

A telephone number for the listed owner was disconnected.

Marta Reyes, who lives a few blocks away, said she and Marena Vanegas became friends in El Salvador, then were reunited after moving to the United States.

"She was a wonderful mother," said Reyes, weeping as she hugged other onlookers. "They were a very, very nice family. She was always with her kids."