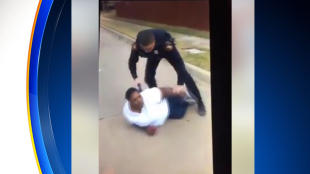 FORT WORTH, Texas -- Two police commanders in Texas have been temporarily replaced as investigators determine who leaked police video and other material in the controversial arrest of a black woman and her daughters by a white Fort Worth police officer.

KXAS-TV in Dallas reports an assistant chief and deputy chief were questioned in the matter.

The Fort Worth Police Department began an internal investigation after officer William Martin’s body-camera video was leaked. Martin’s disciplinary records also were released to defense attorneys and others.

Martin responded in December to a dispute involving Jacqueline Craig, who said a neighbor had assaulted her son for littering.

The leaked bodycam footage provided a new angle of the moments prior to Craig’s arrest. The incident first drew public outrage after one of Craig’s daughters posted a video she took on her cellphone to Facebook. The cellphone video appears to show Martin escalating the situation before he forces Craig to the ground and arrests her and then her two daughters.

Charges against Craig were later dropped.

Martin was suspended without pay for 10 days, but was not fired after an internal investigation. The Craig family expressed dismay over the chief’s decision not to fire the officer, announced in January. The family also said Craig’s report that her neighbor choked her young son was ignored.