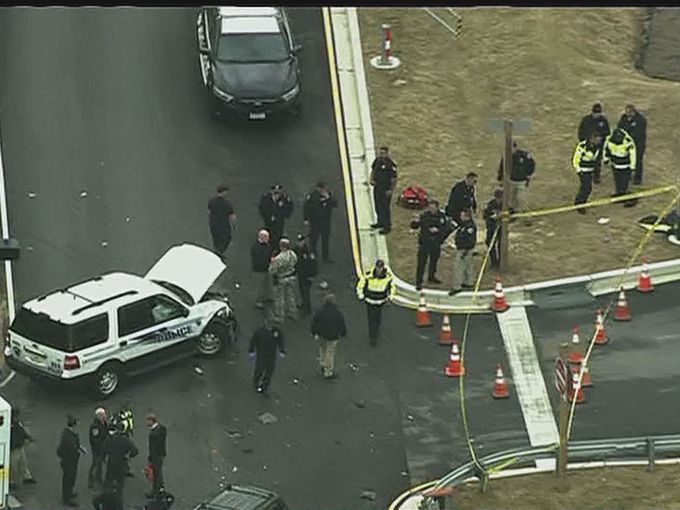 FORT MEADE, Md. -- Officers opened fire after two men dressed as women refused to stop Monday at the National Security Agency gate at Fort Meade and then smashed into a police vehicle blocking the road, officials said. One of the men died, and the other man and the officer were hurt.

A police officer and the other man in the vehicle also were hurt, the NSA said in a news release. Investigators have not yet determined how the man in the vehicle died, and the conditions of the wounded man and officer were not immediately clear.

A U.S. law enforcement official told CBS News that officials believe the two people who rammed the gate were men dressed as women, and also that a small amount of cocaine and a weapon were found in or near the vehicle.

Howard County police confirmed the SUV was stolen from a motel in Jessup, MD.

One of the suspects who was shot in the incident was identified as Kevin Fleming of Baltimore, U.S. law enforcement sources told CBS News. Fleming, who was hospitalized, has a lengthy criminal record including for assault.

"The incident has been contained and is under investigation," said Colonel Brian Foley, Fort Meade garrison commander. "The residents, service members and civilian employees on the installation are safe. We continue to remain vigilant at all of our access control points."

An FBI spokeswoman said earlier in the day that the incident was not believed to be linked to terrorism. The NSA said the incident was contained to the vehicle control point area on the perimeter of the secure campus.

A senior defense official said the two men were dressed as women. That official spoke on condition of anonymity because the official was not authorized to discuss an ongoing incident.

The NSA is headquartered on the sprawling Army installation near Baltimore.

The FBI is investigating and working with the U.S. Attorney's Office in Maryland to determine if federal charges are warranted, FBI spokeswoman Amy J. Thoreson said in an email.

CBS affiliate WUSA-TV showed two damaged vehicles near a gate and emergency workers loading an injured uniformed man into an ambulance. Aerial news images showed that one of the damaged vehicles was a white SUV marked "NSA Police." Its front end was crumpled, and the hood was up. The other was a dark, unmarked SUV.

A building on the NSA campus was damaged by gunfire earlier this month. Authorities captured a man March 3 who they believe fired that night on the NSA site, as well as earlier at several nearby places and two moving vehicles. The suspect in that case, Hong Young, told police he heard voices directing him to fire on one of the occupied vehicles.

The gate that serves as the NSA entrance is just off the Baltimore-Washington Parkway, a scenic commuter route. In addition to the NSA, Fort Meade is home to the Defense Information Systems Agency and the U.S. Cyber Command. About 11,000 military personnel and about 29,000 civilian employees work on the property.