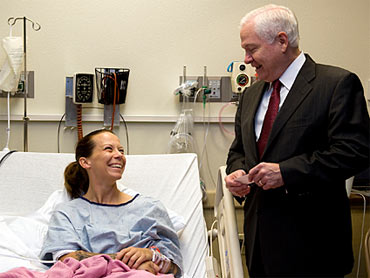 An officer who has been hailed as a hero in the Fort Hood massacre says the scene was "confusing and chaotic" but she remembers getting shot.

Sgt. Kimberly Munley says getting shot felt like "a muscle being torn out of my leg."

Munley was one of two civilian police officers who confronted the Army psychiatrist accused of killing 13 people and injuring 29 at the Texas military base last week. She and Senior Sgt. Mark Todd were interviewed on "The Oprah Winfrey Show" Wednesday.

The pair - interviewed by satellite from Texas - received a standing ovation from Winfrey's studio audience.

The 34-year-old Munley is out of the hospital after undergoing two surgeries. The 42-year-old Todd was not wounded.

Munley said that her condition is improving daily and said, "I'm just hoping that the rest of the officers and the injured and the families of the deceased are healing as well."

She said that she had been fueling and cleaning her patrol car in preparation to hand it off for the incoming shift when she got the call from Fort Hood.

"We didn't have too much time to think," she said, but thanks to extensive training, "it becomes second nature and kind of reflexive for us to react."

Todd said he received the call following a fairly routine morning. At first he thought the "shots fired" may have been part of memorial service when blanks are routinely fired to honor the deceased.

He said that the shooting was the first time in a 25-year career that he had to use his weapon.

The New York Times reports that an eyewitness refutes the military's version of what happened -- that it was Munley who took down Hasan. The newspaper cites the eyewitenss as saying Munley was shot by Hasan, went down, and Hasan turned away. Todd arrived at the scene, the Times adds, saw Hasan fumbling with his weapon, and shot and handcuffed cuffed him.

The military isn't commenting on the Times report.