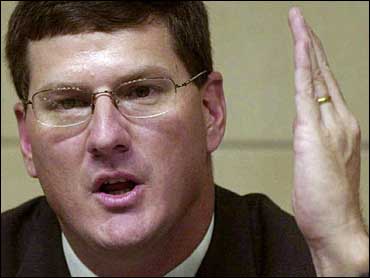 STROUDSBURG, Pa. - A former U.N. weapons inspector nabbed in an online sex sting was convicted Thursday on six counts, including unlawful contact with a minor, for exchanging explicit messages with a 15-year-old girl in a chat room and then performing a sex act on himself.

Jurors in Monroe County convicted 49-year-old Scott Ritter, of Delmar, N.Y., on six of seven counts. He was acquitted on a criminal attempt charge.

Ritter exchanged explicit messages with a detective posing as an underage girl and masturbated even after the undercover officer stressed during the chat that he was a minor, prosecutors said.

"The jury reached the right decision," Monroe County Assistant District Attorney Michael Rakaczewski said after the verdict. "They saw the case for what it is and the defendant for what he is and what he did."

"Even though a person may know what they're doing is wrong, they may be intelligent enough to try to avoid and get away (with it)," Rakaczewski said. "Sometimes, the internal drive to engage in these types of deviant sexual behaviors is just too strong."

Neither Ritter nor his attorney, Gary Kohlman, commented outside court.

Sentencing is set for next month. Each of the five felony counts carries a maximum sentence of 7 years in prison, but Ritter is likely to get much less under sentencing guidelines.

Kohlman acknowledged in his closing argument that jurors were likely "troubled and offended" by the graphic chat and video of Ritter that prosecutors played, but said they were required to put aside their personal distaste because "this is not a referendum on whether anybody in the courtroom approves of adult chat rooms."

He said the case turned on Ritter's intent.

Ritter took the witness stand in his own defense Wednesday and said he believed the person he met in a Yahoo chat room on Feb. 7, 2009, was an adult acting out her own fantasy.

Ritter was one of the U.N.'s chief weapons inspectors in Iraq from 1991 to 1998. He resigned after accusing the United States and U.N. of failing to get tough with Saddam Hussein. Later, he said that Iraq had destroyed its weapons of mass destruction, and he became a vocal critic of the U.S. invasion.