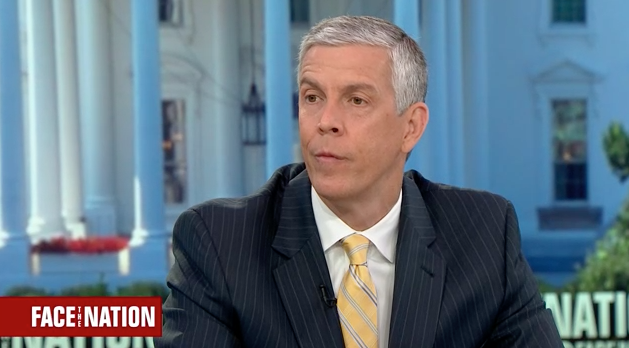 Former Secretary of Education Arne Duncan says that political decisions about education "don't reflect" a desire to have better schools and teachers, saying that Americans "never vote on education." In his new book "How Schools Work" out on Tuesday, writes that the American education system "runs on lies."

"We say we value education, but we never vote on education. We never hold politicians accountable — local, state or national level — for getting better results," Duncan, the education secretary under President Obama, said on "Face the Nation" on Sunday. He added that the "toughest lie" for him personally is that "we say we value kids, and we've raised a generation of young people, teens, who have been raised on mass shootings and gun violence, and that simply doesn't happen in other nations."

Duncan said that the Education Department had both successes and failures under his leadership during the Obama administration. But he said he feels a "huge sense of urgency" to improve the education system.

"As a nation, we're not top 10 in anything," he said. Duncan also leveled criticism at his successor, Secretary Betsy DeVos, who has experienced her fair share of controversy during her tenure. He said DeVos doesn't "understand" basic concepts of education policy, including the distinction between student improvement and proficiency.

Duncan mentioned a recent incident in which DeVos' $40 million family yacht was untied and drifted away, causing $10,000 in damages. He said serves as a "crazy metaphor" for her education policies.

"The policy is adrift. There's nothing out there of substance. We should have some concrete goals as a nation," said Duncan, arguing for greater access to pre-K for all children, improving graduation rates for high school students and being a leader in college completion.

"None of those are on the radar. They talk about small things and that for me is — we're selling our nation short. Great education is our way to have a stronger economy. We have to educate our way to a better economy. You don't hear any of that. We don't have big goals. It should be bipartisan, nonpartisan," he added.

"How Schools Work" is published by Simon & Schuster, a division of CBS Corporation.