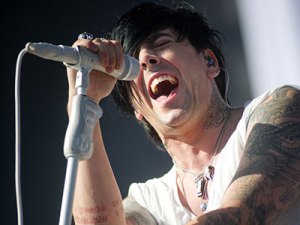 LONDON - The former lead singer of British rock band Lostprophets has pleaded guilty to a series of sexual offenses, including trying to rape a baby.

Ian Watkins, 36, was arrested last December and charged with more than 20 offenses, including conspiring to sexually assault a child and making indecent images.

Watkins had initially denied the charges but changed his plea Tuesday at Cardiff Crown Court and admitted 11 offenses, including sexually touching a 1-year-old, encouraging a groupie to abuse her child and making child pornography.

According to the BBC, evidence against Watkins came from computers, laptops and mobile phones.

Watkins allegedly filmed the assaults which took place in several hotels in London and south Wales.

The BBC reports that one of the text messages being used as evidence against Watkins allegedly read, “If you belong to me, so does your child.”

Watkins also reportedly planned to “teach” the infants how to use drugs.

Prosecutors said  meth, cocaine and GHB, also known as liquid ecstasy, were found during their searches, reports the BBC.

Watkins will be sentenced on Dec. 18.

Lostprophets - which formed in 1997 and had a chart-topping album in 2006 with "Liberation Transmission" - announced it was disbanding after Watkins' arrest.